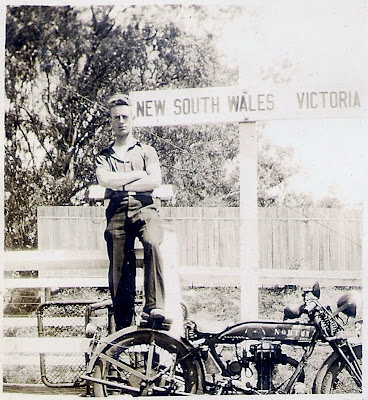 An email from Paul in Australia:


"I have a soft spot for Nortons. My grandfather had several in his collection including a Manx that raced at the IoM in the late 40's. His collection was sold of after he passed away and I lost track of where the bikes ended up. Recently I came across the attached photo of him in what I believe to be the 1920s on a bike he rode to the Victoria/New South Wales border here in Australia. I was hoping you may be able to identify the bike for me? Kind Regards, Paul"

JdK: This is a mid-1920s Model 18 equipped with a later set of electric lights. The rear carrier disappeared and someone fitted flat mudguard stays. Not sure what the bulge is that I see behind the carburetter. He lost a rubber knee grip. Great photo!

Simon: "I think it is a 1926 Model 18 (or even 1927 if that is a wing nut type adjuster on the fork damper - not too clear) - the rockers are the arched type first used on the 1925 Works bikes and pretty well standard from the end of  '25 through to end '29. None the less, they could have been changed along the way for the later type though it means changing the pushrods and push rod return springs as well."

Roger:  "There are some indications that the picture was taken much later than in the 1920s as the machine is in a well worn state and the pork pie rear lamp is more mid 30s. The manual oil pump feed does not appear to be connected to the crankcase but there is a feed from the bottom of the tank with a tap. The gear change lever has been shortened like the one on LPD1 so that it can be operated by foot. The rear stand has been changed and is no longer held up by the over centre spring. The electric lights would need either a generator or a battery so that is probably what is sitting behind the carburettor. I don't think that the kneepad is missing, I think another one has been placed on top of it."
Newer Post Older Post Home