The Norton Scrapbook - a Curate's Egg?* 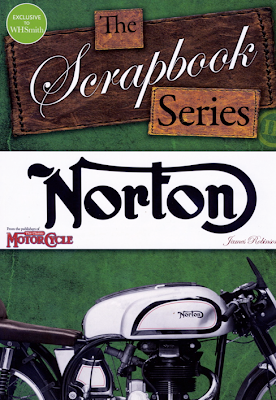 A book review by Simon Grigson

The latest glossy offering from Morton's Group by James Robinson, Editor of The Classic Motorcycle.

I have just received a copy of the Norton Scrapbook and from my view-point as one who has a considerable interest in the pre-WW II era, I find it disappointing, especially so as the Editor has access to what must surely be the best possible archive of motor-cycling history in the world.

Whilst I appreciate the scrapbook theme may have some merit, excessive use by the layout designers of the theoretical adhesive tape to 'attach' the photos to the page has been vastly and carelessly over-done - to such an extent that some images of complete machines, or machines and riders, are seriously impaired.

As regards the overall make-up of the collection, I find it hard to understand why we are presented with eight pages relating to the 1939-45 WD 16H and Big Four machines - a couple of pages would have sufficed - yet there is but one, yes ONE photo relating to Nortons at Brooklands. Bearing in mind that Nortons were probably the most successful marque to be raced at Brooklands in the 1919 to 1939 period, with dozens of wins and world records, this is a fairly serious omission by any standards. Incidentally, the somewhat uninspired print selected is that much used photo of J.L.Norton, D.R. O'Donovan and R. Judd with the 1922 prototype OHV engine crudely shoe-horned into one of O'Donovan's sidevalve Brooklands steeds.

I suppose it is inevitable that there will also be errors in the text and captions and in the section covering the period up to 1939 there are certainly a few which sprang to my attention. Possibly someone with more in-depth knowledge of the Edwardian and thirties periods might pick out a few more. And last but not least, concerning the early Moore-designed OHC CS1 engine, of which a photo taken in 1960 has been selected (see Built for Speed/John Griffith/Motor Cycling), the 'cricket bat' nick-name has been used yet again - a relatively modern invention which was not current pre-war, according to my sources. The earliest mention of it in print I have seen is in Bob Holliday's two Norton books, which came out in the seventies. If it's any consolation to James Robinson, Bob's books contained considerably more errors than the Scrapbook!

Summing up, this is not a book to which I shall refer very frequently but equally, it is cheap and cheerful and will be retained rather than sent to the nearest charity shop.

*For those unfamiliar with the phrase, have a look on Google and all will be revealed!
Newer Post Older Post Home