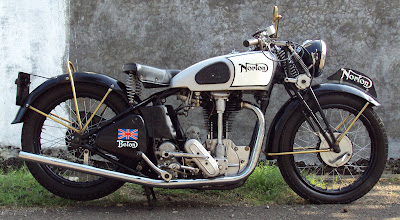 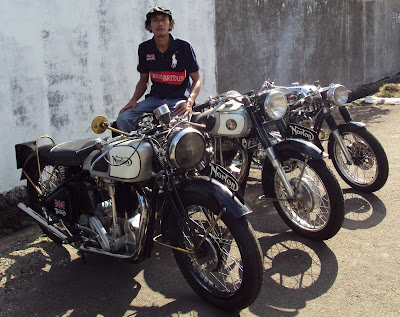 These photo's were sent to me by Ballazam from Indonesia (in the picture) and they show a remarkable motorcycle. Clearly a Carroll engined Norton, but it's the very rare 596cc version; bore and stroke are indicated at the crankcase as 82x113.

It took me a while to find the following passage in the Norton literature (Dennis Howard. Norton. Ballantines illustrated History of the Car marque book No 9, 1972):

"Bracebridge (Norton) never listed the 596cc overhead camshaft engine for sale to the public, for the simple reason that it really did not exist as a production model. The Norton works produced two versions of the (82mm x 113mm) 596cc single OHC engine, one in International and one in Manx form. Roughly a dozen of each were manufactured, the frames being of stouter construction, and having a large vertical kink in the upper frame tube in order to accept the considerably taller engine. The Inters were built for the leading Trials sidecar men of the period, while the hotter Manx version was more strictly suited for sidecar road racing. As several of the "600s" were doing battle in passenger machine races in the immediate postwar era, it is surprising to learn that few, if any, still exist..."

So that's the reason I could not find a model number for these "Bigger Bangers" as they were later called in the books. Apparently they were quite successful in the races. How on earth did this one end up in Indonesia? More pics via this link.
Newer Post Older Post Home