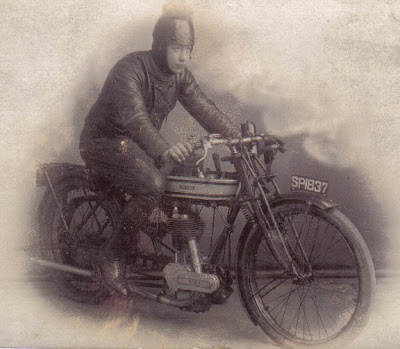 Howard sent this photograph of a gent on an early Norton. The logo on the tank identifies it as a machine built before 1915; the smooth appearance of the crankcase suggests that it dates from after 1912. Before 1915 the Norton models were listed by description and not using the familiar numbering scheme (e.g. Model 7, 8 or 9) and this would thus be a 3 1/2 HP belt drive model. Note the 'gearchange' lever on the tank that operated the Phillipson pulley on the crankshaft.
Howard: "I think it is a pre 1913 model. The "SP" registration number is from Fife, Scotland. No idea who the rider is....bought the photo on eBay. I notice an acetylene generator bolted up on the handlebars so the bike looks to have been on the road and then stripped down for racing. It has a Senspray carburetter fitted. Great looking machine....wish it was in my shed!"

Who can add to the description?

Roger: "The picture is of Ossie Braid on the machine that he rode in the 1914 TT. He was part of the O'Donovan works team and this picture is of the same machine as the gear change handle is taped up as in the 1914 TT pictures. He is in his racing leathers and helmet. I suspect that he used the machine on the road after the TT which is why it is fitted with an acetylene generator. The composition of the picture suggests that it was taken by a professional photographer when he returned home after the race which is why the background is blurred out. "
Newer Post Older Post Home