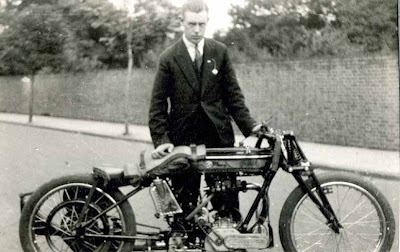 When Ken Boulter restored LPD1 nearly 20 years ago he wished to follow Pat Driscoll's wishes that it should not be over-restored so he made it look well used. The discovery of pictures of Pat's Nortons in his photo album showing bright petrol and oil tanks and an immaculate overall turn out prompted a rethink. Pat's son Chris said that his father stripped down all of his motorcycles at the end of every season and sent them away for annealing. This means that they would have been repainted and rebuilt every year so it was agreed with the Denly, and Driscoll families and Ken that LPD1 should have a facelift with the intention of restoring it to the condition that it would have been at the end of its racing career in the early 30s.

Cleaning and polishing
Some of the changes would be relatively easy and reversible. As the outfit no longer needs to be road legal the front mudguard and rear stand were removed. From the pictures taken in 1946 it was established that the exhaust system was a light colour as was the rear brake backplate. Stripping the black paint from these showed that the backplate and the exhaust pipe had originally been nickel plated so these were polished after stripping the paint showed that Bert Denly's cans were always left unpainted whereas Pat's were always black. It was decided to polish the can so that it matched the exhaust pipe on the basis that it had been painted 20 years ago and could always be repainted. The rear brake lever and rod were found to have their nickel plating virtually intact so they too were polished. The primary chain guard was removed and polished and after concerns about safety was replaced although they were never used at the time it was raced. Oil pipes; the routing of the oil pipes was changed so that the Pilgrim pump now feeds the two pipes to the timing chest and the manual plunger to the front of the crankcase. Although this is not how it was assembled during the war this is the most likely configuration when the pump was added as it would provide a continuous supply to the cams with a manual top up to the sump. The metering device fitted by Ken was removed as this was not present in this form in 1946. 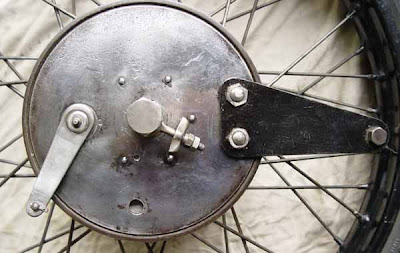 Rear wheel
The rear wheel hub and brake drum were found to have been painted black over silver which in turn was painted over the original black stove enamel. The silver paint had been applied very thickly and the heat from the rear brake had blistered it so both of the top coats were removed to reveal the original finish. The shortened gear change lever fitted in 1946 had been made by cutting and welding a well drilled standard plated lever and this too cleaned up well and refitted. The decision on how to treat the rest of the components was a difficult one. It had been thought that the petrol and oil tanks had been dipped in molten solder at the works to give a shiny finish that quickly tarnished. 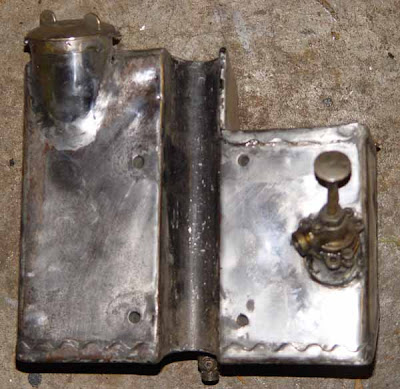 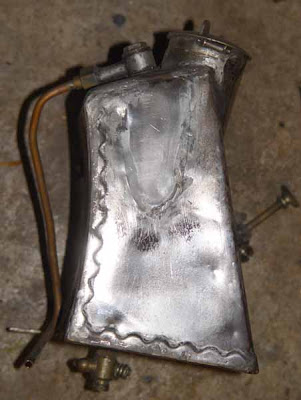 Oil tank
When the oil tank was removed it was found that the bottom had been painted only once - in black. Removal of the flaky parts showed that the tank had originally been nickel plated and this explained the very bright finish in the photographs of Pat's machines which first appeared in July 1927. However, the only known pictures of a plated tank were those taken by Pat in 1927 or of Bert during practice runs so it is thought that the tanks were produced by the works immediately after the hour record as they would certainly look smart. None of the publicity pictures show these tanks so it is likely that "marketing" deemed them to be inappropriate as they did not match the ones sold to the public so they were passed to Pat. The KLG badge on the offside of the tank was removed as this too was not shown in the 1946 picture and it was found that it covered a patch of black paint.

Further examination showed that there were three layers of paint - silver on top of black on top of silver. The black had faded on the surface to a mid grey which is likely to be its colour in the 1946 picture. As the tank had originally been plated it was decided to remove all of the paint to reveal that most of the plating on the bottom and rear had survived. The polished finished was lined with black in the style of the late 20s pictures of the team's Nortons. Removal of the paint revealed that the tank had been modified on three separate occasions. The first was to change the position of the filler from the side to the offside front. This appears to have been done by the works as it is very neat. The second was a repair to the threaded boss at the bottom of the tank for the oil feed and the third the cutaway for a different sidecar attachment. The sequence appears to have been carried out in that order as the first coat of silver was added to cover the change in filler position. The black was added to cover the repair to the boss and the cutaway was made up of unplated metal with only black and a silver coat on top. The tank would originally have looked very much like to ones used for the dry sump TT outfit owned by Pat as it has a large capacity (about a gallon) and is fitted with bosses for both take off and return pipes. It is likely that the black paint was applied in 1929 when the Nortons were called Norton Driscoll Specials in the programmes as the picture of Lance Loweth's Norton taken in 1929 with a black tank. By 1930 both Pat and Bert were helping Bill Lacey with his record attempts and as Bill was a works rider Pat's machines reverted to being Nortons with silver tanks.

Petrol tank
Examination of the petrol tank showed that it too had been plated but as the plating did not seem to have survived, the underside plating had virtually disappeared, it was decided to try to keep as much of the original paint as possible. Examination showed that the plating had been painted silver, then black, then silver again (one very thick coat and a much thinner one) and that a coat of a yellow varnish had been added by Ken to give the appearance of age. Careful removal of the varnish also removed the post-war thin silver paint to give a well used look of three separate coats with bare metal in places so it was decided to leave it like that. The Norton logo showed that there were at least two different types on top of each other. The bottom one was probably applied after the war as it can be seen in the picture of that date and that it is of the mid-30s with the "Regd Trade Mark" letters underneath it. This had been overlaid with a transfer of the earlier type but it had been badly yellowed by the varnish and removal of the varnish also removed the transfer. A logo of the proper type will be added when we know what it should be as there are at least four different styles. Handlebars
The painted handlebars were found to have originally been plated, not surprising as this would show up cracks and Bert reported that he had them break on two occasions. The twistgrip has been replaced with a Binks quick action racing twin lever assembly that came from Bert Denly courtesy of his son. The clutch lever was also replaced by one of Bert's from the same source. The arrangement of levers is now similar to that used by Pat with on the left: the clutch, valve lifter, manual oiler and the right the twin carburettor control and front brake. 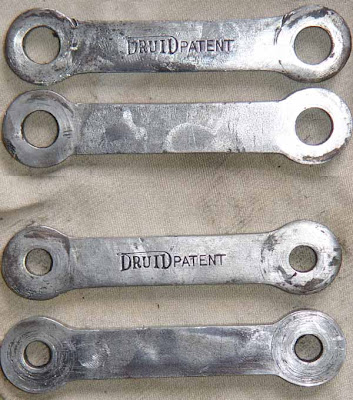 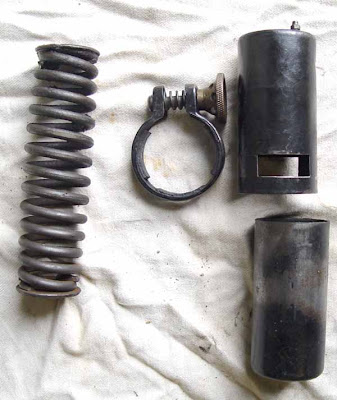 Forks and front wheel
Before the front wheel and forks were removed it was noticed that the two top spindles were not parallel. When the link plates had been removed it was discovered that they were of different lengths with one ¼ inch longer than the other. Further inspection showed that there were two long ones and tow short ones but that they had not been properly assembled. The reason for this became clear when it was discovered that the ones stamped Druid Patent were a matched pair but the illustrations showed that they ought to be fitted on the same side of the forks. It is likely that this led to them being improperly assembled during the war and have remained like that ever since. Now that they are correctly assembled the forks are much softer which is not surprising!

The enclosed spring had been painted with a rough matt paint which was removed to show the original stove enamelled which was in good condition. The damper works on part of the cylinder which was left unpainted. The reason for the grease nipple and oiler on top of the enclosure is a mystery as the only area that it would serve is the damper which is the last think that needs lubrication.

There was very thick paint on the forks which turned out to be a thin coat of black on a thick grey paint. This was a mystery until it was realised that a couple of pictures of Pat's machines in 1931/2 showed the forks and frame to be a light colour and certainly not black as in the earlier pictures. As the forks had seen very little use it seems likely that they were only used a couple of times when the machines were painted grey or silver. They were not stove enamelled so after smoothing they were given a coat of black paint.

Ken informed me that the front wheel and brake were from a Raleigh. Some research showed that the 5½ " brake was used on Raleighs from 1923 to 1927 on motorcycles from 250 to 500cc. As Don had worked for Raleigh from 1927 and it is likely that LPD1 was assembled from components found in Pat's shed there might be a connection. Of more significance was the discovery that the brake was fitted to the nearside on the Raleighs which explained why the torque arm was not a good fit on LPD1. Reversing the wheel corrected this and should provide a better action for the lever as it provides more leverage for the trailing shoe. 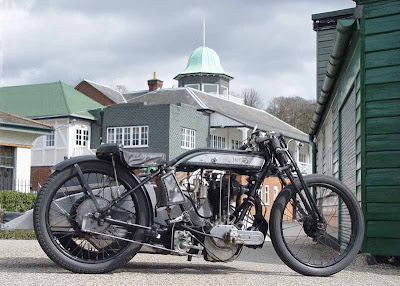 A shortish run on the completed machine showed that removing the paint from the exhaust system did not get rid of the complaints from the Brooklands residents and that there was little difference to the effectiveness of the front brake - it is still useless. It did however provide bluing of the exhaust pipe showing that it is still a working machine!