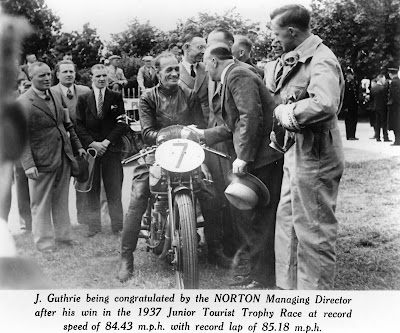 The pictures above show Jimmy Guthrie; famous for 19 motorcycle Grand Prix wins and 6 victories at the Isle of Man TT races. Most victories were on Norton motorcycles. Sadly, he was killed on august the 8th 1937 riding in the German Grand Prix. Stanley Woods, an eye withness to the crash, is adamant that a German rider "took Guthrie out". According to him, Jimmy crashed as he was forced into a gutter by Kurt Mansfeld on his DKW. Mansfield was one lap behind when this happened; he reputedly was an emotional man, perhaps trying to show he was just as fast as Jimmy. Though Stanley suggests he did it on purpose as the Nazi regime was unhappy at the English riders being so successful.

Dennis, who has an excellent website on Velocette motorcycles, is the custodian of Australian Allan Schafer's motorcycle literature collection. Allan was a prolific letter writer in mid 1930s to many of the worlds top riders. This photo above and the letters below come from Allan's collection; the pic is a sad shot of Jimmy (in the middle) in the pits just prior to that fateful crash. Mildred Woods (Stanley's wife) sits on the pit counter, team mate Freddie Frith is on the right.

Less well known, Jimmy had a motor-repair business together with his brother Archie and was a technically minded man; see his comments in the letter below on the plunger rear suspension used for the first time in 1936.

For a short film on Jimmy's life, click this link. 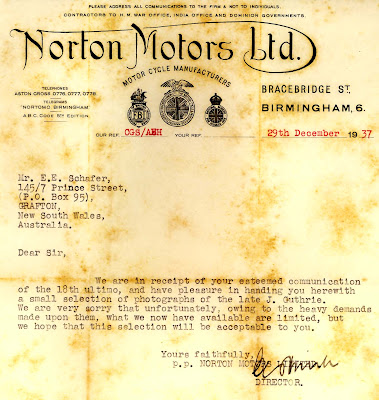