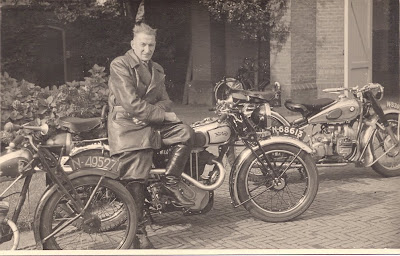 Martin from the USA sent me this postcard. The photo must have been made in Holland, suggested by the Dutch licence plates, the bicycles in the background and even the man's haircut. On the back of the unused postcard it reads: Reportage, A v Beurden, Hof fotograaf, Tilburg. Tilburg is a town in the south of The Netherlands and mr van Beurden must have been a professional photographer by approval of the Queen herself.

The bike on the left is a DKW RT, a 98cc two-stroke. Many were built, for the only reason that they were very cheap to buy and run I guess. The bike on the right is a 600cc side valve BMW; strikingly, it seems to be almost completely covered in chrome. The BMW is a type R6 or R61, depending on whether it has rear suspension or not, which is not clear from the picture. Both BMW types were produced after 1937.

The Norton is a brand new Model 20. The M20 has the 500cc engine from the M18 but with a twin port head fitted. It's a trials version. In the 1930s, any model could be ordered in trials trim for a few pounds extra. These extra's included things like more ground clearance, a sump plate, high level exhausts, wider front mudguard, foldable kickstart and competition tyres. A very luxurious bike, with the tank panel and all that chrome.

The pushrod tubes still run parallel to each other and the headlight is the 8" Lucas. All of this suggests a 1935-1938 model to me. (Thanks  Martin and Chris!)
Newer Post Older Post Home