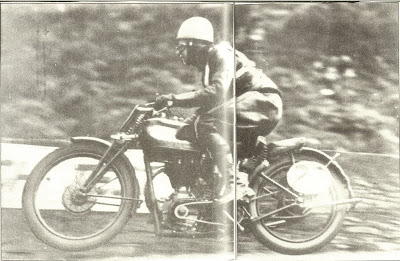 Mr Jock Muir (above) was a student at Cambridge University and came from Radlett, a small town close to Luton in Bedfordshire. Jock raced Velocettes with a great deal of success. At one point in the 1930 Junior Manx Grand Prix he was second to Freddie Frith and he settled the fastest lap before retiring due to mechanical problems. In the Senior race he finished 5th, mounted on a 350cc (!) Velocette! 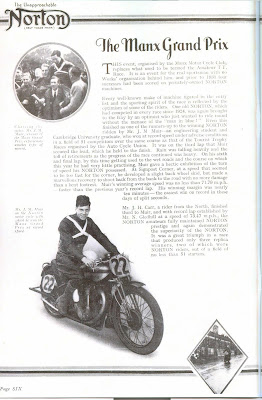 Jock did not disappoint Norton and won the 1931 Manx Grand Prix on the CS1; the page above from the 1932 Norton catalogue “That brilliant motorcycle” reports on his victory. The photo at the top of this page probably shows him on his Norton during the race. Happy with the outcome, Dunham and Haines displayed the machine in their shop and the photo below shows the Norton on display, along with Jock’s Grand Prix trophy. 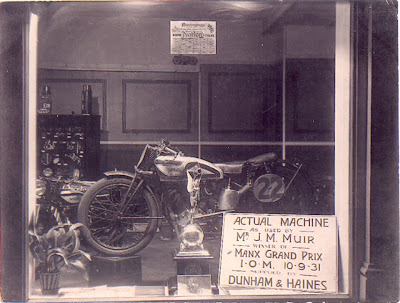 Jock continued to race his Norton and was quite successful and photos of him appeared in the 1934 ‘Roadholder’. One has the caption “J M Muir during his record breaking run of over 101 miles in the hour”. He raced against riders like Frith, Daniell and Crasher White and certainly was no slouch.

Then comes a gap of about 60 years when in 1996 a long standing friend of Alf purchases the remains of a Norton from a farmer in Northern Ireland. The machine was in pieces and in very poor condition. It looked distinctly pre war but it had had a swinging arm conversion and a pair of BSA telescopes replaced the original girders. On his friend’s behalf, Alf sent the engine and frame numbers to the Science Museum in London who at that time held the factory dispatch records and the records stated the magic words; the frame number and the engine number matched and the machine was a works special prepared for the 1931 Manx Grand Prix! 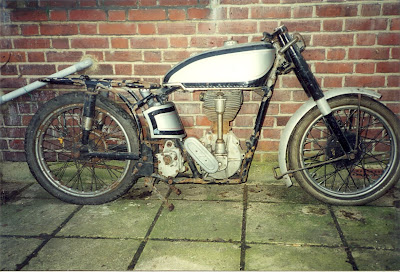 It took Alf another five years to persuade his friend to part with the Norton. As the owner, Alf continued his search and wrote to Old bike Mart who published a photo and description of the bike. There were many replies from Luton residents and a note turned up from a Mr Peter Roydhouse stating that a Norton with engine number 51750 had been supplied to Mr J M Muir in 1931. We can only conclude that Alf most probably owns the remains of the genuine 1931 Manx Grand Prix winning Norton!

The engine of Alf’s bike is of a later type than 1931 as it has the timing side rib in the later position and the filter bolt under the bevel housing that was introduced after 1932. It also has a more modern bronze head and a magnesium cam box with a central oil feed fitted. The engine is stamped as per the original number and there are no signs of another number that has been erased. There seems no doubt however that favored customers could and did return their bikes to the factory for up-dating and the fitting of such things as new crankcases, bronze heads etc. so all of these changes may have been made in the machine’s active life as a racer. Jock retired in the 1933 Senior TT so perhaps he wrecked his engine? 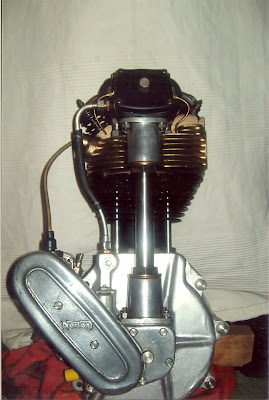 Alf started the restoration in 2003. Engine and gearbox (still containing the original close ratio gears) have been rebuilt by now but Alf intends to leave the frame as it is; all part of the bikes incredible history! (Story by Alf)
Newer Post Older Post Home