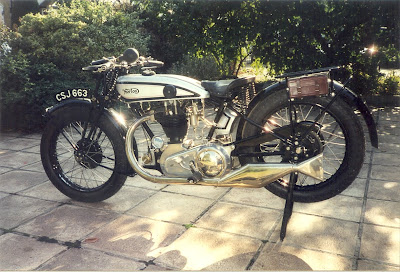 I've been exchanging emails with Alf for a while now and yesterday he sent me some photographs of his brilliant 1930 M18 Norton. Alf is holding the coffee cup in the picture below. The mayor of Sittingbourne in Kent is watching. 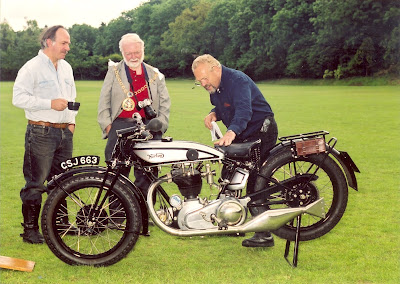 At the end of the 1920s - beginning of the 1930s, Norton motorcycles went through a rapid series of changes which makes the bikes from these era so very interesting. Norton had updated the range with saddle tanks and the frames were modified in the process. Parts like the rear brake plate anchor, fitting of the brake pedal and the steering damper were redesigned; the saddle construction was changed and the seat height became lower. An aluminium primary cover was installed. The pushrods and part of the rockers became enclosed. On the other hand, total-loss lubrication was still being used, Royal Enfield and Horton would supply hubs and brakes and the Sturmey Archer 'box with handshift was still fitted.

All of this made them into bikes with a 'split personality', having most of the desirable features of the flat tank Nortons - except for the flat tank! Many consider the flat tank models to be prettier but be assured that Norton knew exactly what they were doing when they updated their motorcycles. My 1929 M18 is more comfortable and handles better than it's flat tank predecessor of one year earlier. 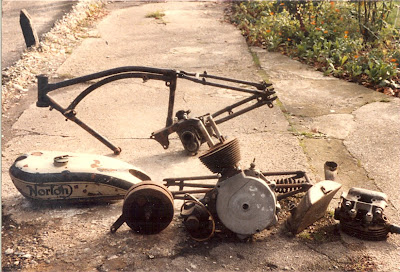 Back to Alf's1930 M18. Alf has had it for 40 years and when you have a look at the 'before' photograph you may appreciate all the hard work that went into it's restoration.  Many parts were missing and Alf went as far as to import an original Horton front hub all the way from Australia. As a jeweller, Alf had the skills to make many of the other missing parts himself and the result is impressive; and earned him a bike that must be close to original specification. In his own words "The M18 is just big jewellery, it runs like oiled silk!"
Newer Post Older Post Home