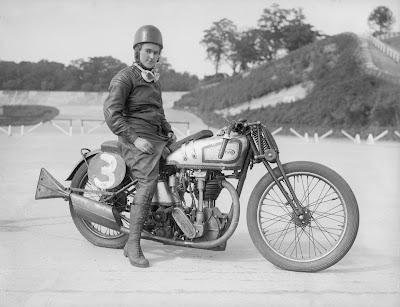 Beatrice Shilling became famous for two things. First, as a university-trained engineer she solved a serious problem with the carburettors of Rolls-Royce Merlin-engined fighters such as the Spitfire and the Hurricane. Acrobatic maneuvres with these planes resulted in fuel starvation and engine cutouts, a serious drawback when chasing -or being cased by- a Messerschmitt Bf109. Beatrice solved the problem by fitting a restrictor in the fuel line, aptly named "Miss Shilling's Orifice".

Second, she knew how to fettle and race a cammy Norton and proved so be lapping the Brooklands track at 106 mph on the M30 prepared by herself, earning herself the Brookland Gold Star in the process. She raced and won from professional riders such as Noel Pope on his supercharged Brough Superior.
Her Norton in the picture above, taken in 1935, is a very standard-looking 490cc M30. It may date from as early as 1932 as the engine does not contain the distinct oilfilter bolt in the bottom of the bevel chamber. Also, the gearbox predates 1935. The crankcases do look a bit dark to me; they may be made from the magnesium-based alloy "Electron" or they may just be dirty. No trick International parts like a narrow front forks or an Andree steering damper are fitted and the engine still has the coil valve springs instead of hairpins. The fuel tank does not seem to fit properly and may have been replaced. Unfortunaly it is not clear whatever it is she did with the engine to make it go that fast though it looks like the inlet tract is longer than standard.
Beatrice raced her M30 untill 1939, at one time even fitting a supercharger. With the declaration of war racing ended at Brooklands and the Norton was returned to a road machine to become Beatrice's chief means of transport for the next fourteen years. (More reading on Beatrice: Google for the book by Matthew Freudenberg)
Newer Post Older Post Home