How Ned got Stanley's works racer OF166 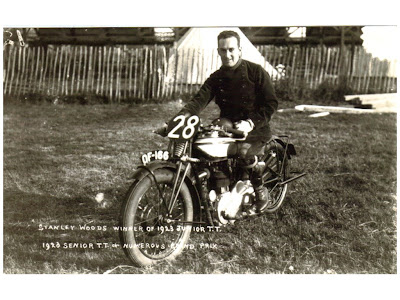 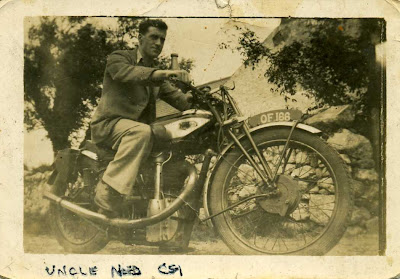 Amazing things still happen; a few blogs ago I published a picture of "uncle Ned'' on his CS1 Norton. Obviously, this was not a standard bike but modifications like the right-hand exhaust can be made by anyone. Then the photo was seen by my friend Simon and with a keen eye for detail and a very good memory the story unfolded. It would be a shame to change the text in the emails below:

John- 'Uncle Ned's' CS1 on your web site has what looks to be one of the 1929-ish works type 7 inch front brakes.....the reg. no. OF166 is Birmingham and it would not surprise me if this CS1 wasn't a works cast-off at some stage! The reg. number seems vaguely familiar to me....

John- no wonder OF166 seemed familiar - it was the reg. no. of the CS1 ridden by Stanley Woods in practise - and perhaps in the actual race - in the 1929 TT. I have a paddock practise photo of him and the bike! Race number was 28.

John - You may notice that Stanleys bike has the usual (awful) 8" Enfield front hub in this shot but other 1929 TT pics. show the racing 7 inch hub (probably Horton).


Great story, but how did uncle Ned get his hands on a factory racer used by Stanley Woods? Half an hour of Googling retrieved the original pic of Ned from the Internet and fortunately it was posted on a forum that displayed the email address of Ned's nephew; an interesting detail is that the nephew operates under the name of NoisyNorton! This is his reply:

Info on the bike is pretty scarce. My Dad told me the story of it many years ago. To make it short it seems there was an Irish soccer player (I have his name written down somewhere but I can't remember it) playing for a team in Birmingham and he was good friends with Joe Craig. Which is how he came by the bike. The bike was supposed to be an ex-factory racer. As the story goes the soccer player brought the bike to Ireland for a summer vacation and never brought it back to England. It passed through the family. Dad, Uncle Ned, Uncle Bill etc. and then disappeared just before WW2. Another friend in Ireland remembered possibly owning it but it has long since disappeared possibly for good. I lived in Ireland for a considerable time and became good friends with Stanley (through the Dublin and District Motorcycle Club).

Hi John - The photo was taken in the TT paddock in '29 and Stanley Wood's riding number was 28 in the Senior. It is not a race day photo as the numbers are the wrong colour - white on black was used for practise sessions. I think it highly likely it was his actual race bike - despite the front brake - rather than a publicity shot on a standard machine. For one thing, it has the right hand exhaust port cylinder head which was ONLY used on the works bikes in 1929. Unfortunately, the 1929 works bikes are not listed in the despatch records in one clump so to speak and individual superseded race bikes when sold much later on, do not seem always to have been given an entry so it is really difficult to be 100% sure of facts at this distance in time! Stanley retired in the event itself.....and was too idle to check as to the reason.

I'm 63 years old and for at least 60 of those years I heard the story of OF 166 being a very special Norton. Stanley Woods was a hero of my Dad during his younger years. I'm sure had he (or uncle Ned or uncle Bill) known it was Stanley's race bike it would still be part of the family. I have a feeling that somewhere in Dublin it is hiding in a shed or garage and will resurface someday...