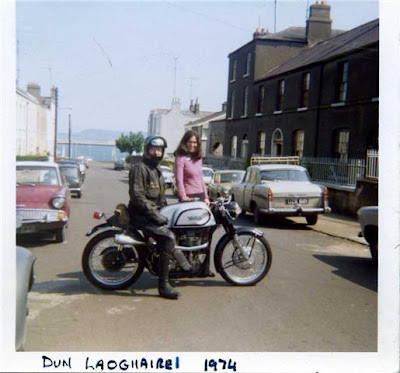 Bill (in the picture) bought his ex-Reg Dearden 350cc Manx Norton from a chap in Yorkshire in the early 1970 for the sum of 30 pounds. He used it on the road and to race untill it broke at a time when spares were impossible to find.

He must have enjoyed it. Reg Dearden was a famous tuner with a very remarkable Isle of Man record for by the end of 1961 his bikes had won 186 TT and Manx Grand Prix awards. Dearden believed that many of his best results had come as the result of mistakes. At one time, Geoff Duke bent an inlet valve of one of his Manx models in the final practice lap; no spares being available, Dearden grabbed a hammer and spent all night tapping the valve untill it was straight. He got the engine running and despite the worst start in Duke's life the Manx engine went like a rocket, with the result that Duke overtook all riders to score one of his most popular wins. (The Manx Norton - Mick Walker)
Newer Post Older Post Home