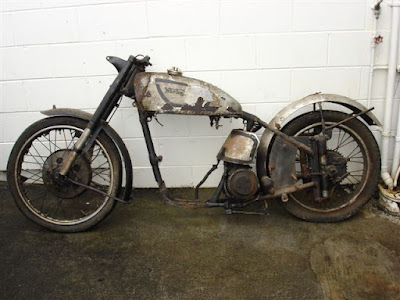 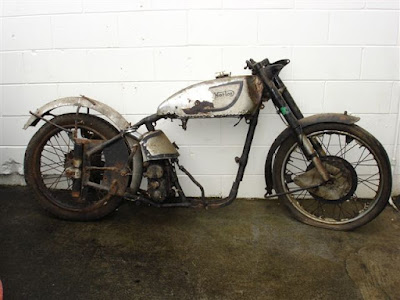 -SG- A regular competitor on Inia's Inter in NZCMRR races is Cloud Craig-Smith and so far he has won three Vintage Championships.  I asked Inia for information about the bike, which I had heard started off as a very rusty relic and here's his reply, as well as photos - thanks Inia!

"Here above are a couple of pictures of the bike as found, just before we totally dismantled it down to the bare lugs, for re-tubing. As you can see it bears little or no resemblance to the machine that Cloud Craig Smith currently pilots and wins on in the New Zealand classic racing scene.

The frame was totally packed with Black west coast sand and broken in several places so it had obviously been campaigned on the beach - the tubes had rusted paper thin ... The bike came, via his family, from the collection of Jack Inch, a well known Vintage Norton character who passed away some decades ago.

The frame was totally re-constucted to factory drawings by Ken McIntosh and the fuel and oil tanks rebuilt by Steve Roberts ... David Warren made all the mudguard stays and fitted the rest of the tinware.

Lindsay Kyle rebuilt and retuned Artie Laven's motor and so far it has won 3 vintage championships here in New Zealand. The rebuild and finish are a total credit to all involved.

I hope this proves the point that often things and projects that are rejected are not always too far gone and one man's trash can be turned into another's treasure ... I hope this encourages those that read this to get on and finish that project they have because the end result, if done well, is always worth it ... " 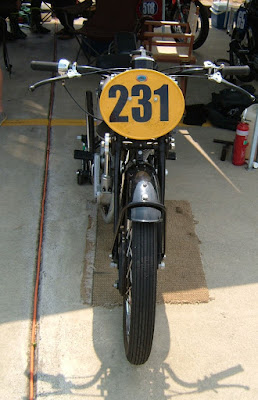 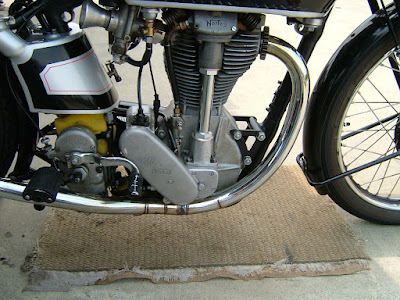 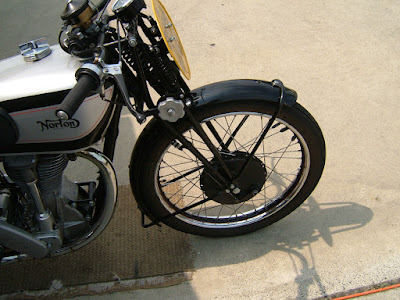