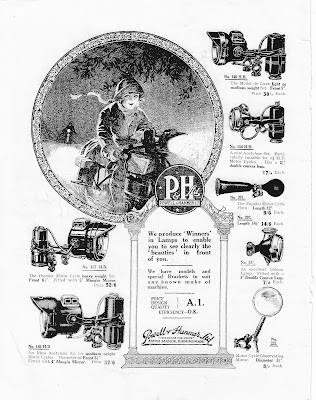 -SG- I recently came across the Powell and Hanmer advert attached.  Nothing really to do with Nortons  except that vast numbers of Norton owners in the twenties and earlier would have used acetylene lamps and P and H were a major supplier.  I found the text in the centre of the advert quite amusing and typical of twenties humour.  Note there are no acetylene rear lamps shown - for the good reason that rear lights did not become compulsory in the UK until about 1927 so the advert must date from earlier than that.

When I was a lot younger and even more foolish than I am now, I actually fitted an acetylene head lamp to my 1930 Norton which I was using to go to work.  It was surprisingly good but oncoming drivers, presumably not recognising the pool of light as coming from a vehicle, seemed unwilling to dip their head lights, so the idea was quickly abandoned. Incidentally,  I did not have an acetylene rear lamp so fitted an illegal cycle rear lamp to the side of the number plate!