-SG- The round ML magnetos were fitted extensively to Nortons in the twenties - initially just to the SV models (OHV models being fitted with the CAV) but with the re-organisation of the company after James Norton's death in 1925, it seems that the ML was fitted across the range on all the diamond framed models. The cradle framed models which came along at the end of 1927 and later - CS1/ES2/CJ and I think JE - were fitted with the racing Lucas KR1. I have been told that the CAV magneto was used by the company for the good and simple reason that C A Vandervell was a major shareholder early in the decade but this ceased with the formation of Norton Motors (1926) Ltd.  I do not know if this is correct or not but I guess it makes sense. 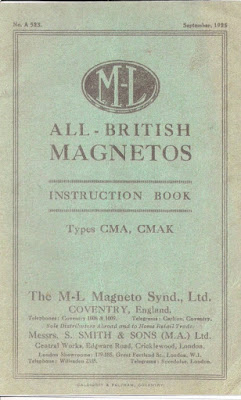 This September 1925 Instruction booklet covers  the CMA and CMAK models which were fitted with an enclosed advance and retard mechanism. The end housings were made of cast Mazak and many of these have broken over the years and are virtually irreparable.  A few replicas in cast aluminium have been made but I am not sure of present day sources.  Incidentally, the 1929 and 1930 version utilised a different HT pick-up secured by two set screws rather than the screw-in pick up shown in this booklet.
Newer Post Older Post Home