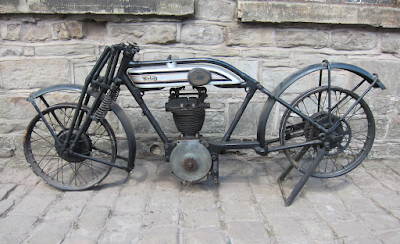 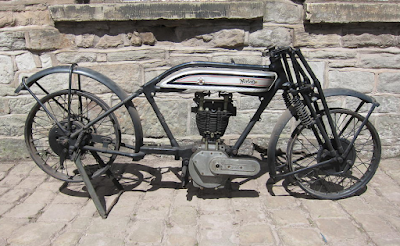 -SG- Our attention has been drawn by Stephen in Australia to the write-up in Bonhams' up-coming Stafford sale, relating to an entirely standard Model 18  from 1927. The Bonhams script writers have spent thirteeen lines of an eighteen line screed woffling on about D R O'Donovan - to whose Norton dealership in London this bike was originally despatched in  May 1927.  It was passed on to the end-user later that month - regrettably name and address illegible in the records.  The bike is described by Bonhams as a Model 18 Racing Motorcycle Project, presumably because, when it was last registered for road use in 1961, the applicant stated that it had not been registered before as it was used as a racing machine prior to that date! Yeah, right!  Having been around at the time, I am well aware that this was an excuse sometimes used by those wishing to register a bike which had no existing log book or registration number! Not sure the vehicle registration authorities would accept such an excuse these days ...

All this apart, the machine has matching frame and engine numbers, correct hubs (though re-rimmed), incorrect forks (Druids instead of Webbs) and is apparently missing sundry other items.  But, with a guide price of £5000 to £7000, it would not be a bad starting point for someone wishing to embark on a Norton flat-tank journey! Lot number, by the way, is 424!