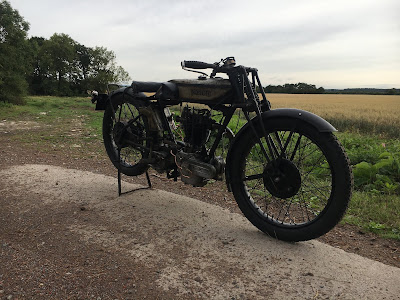 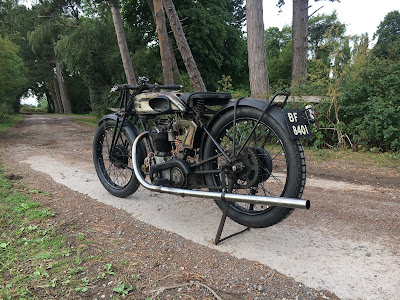 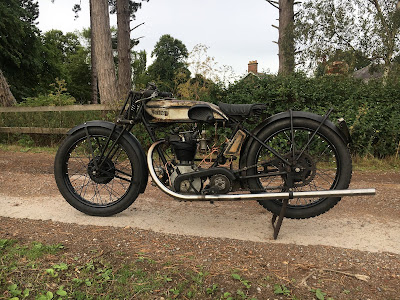 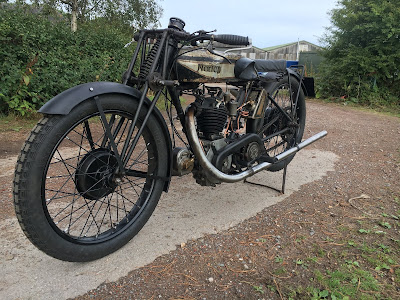 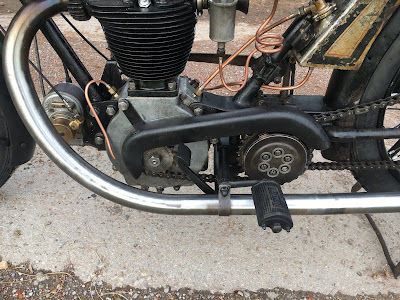 -JdK- Steve in York sent us these pics and words: "Just thought you might be interested in an update on my 1924/26/30 special. I am up and running now with some shake down runs done. Still running a bit lean at the moment but am doing some carb refurbs to resolve the air leaks I believe to have caused this.

I have used an awful lot of what came with the bike but obviously made and sourced parts to finish it off. Only the new bits have been painted the rest is just lightly cleaned and as found. All bearings and bushes replaced, made new fork spindles, new rockers and spindles with needle roller bearings, valve springs valves etc but re used piston with new rings and honed bore is good size. I skimmed the brake drums true and had shoes re lined and it does at least stop now. There is still some ageing of the new bits to be done to my liking and the exhaust is too long but its nice to have things to think about improving.

Yes its not original but it will be getting some use and I do not need to be so protective over it. In the event of parts failure damage I will just make or fit appropriate bits to get up and running again.

I've got the breather just breathing to the floor at the moment until I get the oil pump settings spot on as I keep having to take this off to refill the sump with Castrol R after level checks. I will plug it into the primary chaincase when Im done. I learnt quickly that the Best and Lloyd pump I had fitted can empty the entire contents of your oil tank over a week on holiday so a tap was fitted and now getting a consistent 200 mL or so to stay in the sump is a bit of a battle but Im getting there. Im sure there is a bit of a steep learning curve to setting these up and I now understand why the Pilgrim had been fitted. (At least you can see whats happening). I have got a telltale for the Best and Lloyd pump somewhere and if I can sort its seals out may fit this.

PS: If anyone you know is interested in swapping some 1929/1930 bits, Ive got various, a 1929 cylinder head, good cylinder with good piston, 1930 engines mostly complete, a 1930 tank and the 1930 magneto mount and brake pedal/crossover (that came with this Norton). I am looking to beg, borrow or steal a 1931 type chain/ clutch cover so I can make some for my 1931 bikes."
Newer Post Older Post Home