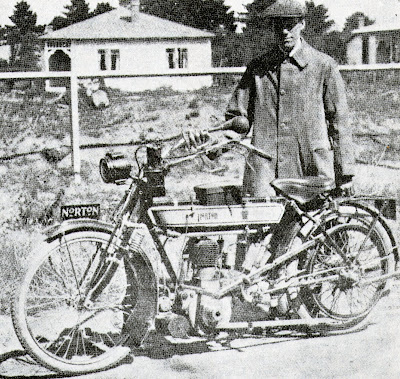 -SG- The rather grainy image attached shows Mr L Pitcher who achieved a perfect score in the February 1912 Christchurch - Banks Peninsular and return event  (New Zealand) on his Norton. This was no mean achievement, bearing in mind the very basic nature of New Zealand roads at the time.

-Andrew in Australia- This Norton likely is 1910 and it’s a Big 4 with a NortoRoc 2 speed gear, the same as the one I have here. That is the only picture of one of these machines taken side on that I have ever seen. There is a fellow in NZ that has a Big 4 engine so more than likely it would be the engine from this bike.

Looks like the rear gear change pedals come out from the rear engine mount bolt and it has a square plate to stop your foot coming off, no rubber foot pegs. Engine defiantly has extended mouth for 633cc. Front guard is half valanced. Front brake lever  is a normal modern configuration. Can’t see a valve lifter. That might be on the right-hand side as they are crank handle start and being a long bike, it would be hard to reach the other side and crank the handle. Bosch DA2 magi with Brown and Barlow carbi. Quite narrow handle bars like the 08 and 09 models. The 2 straps that can just be made out on the seat tube are to hold the leather bag that the crank handle is stored in.
Newer Post Older Post Home