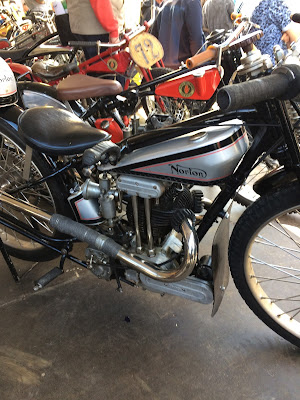 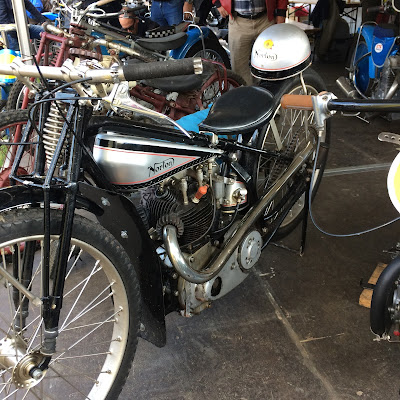 The Haynes Museum bike - which came originally from the Netherlands and is on loan from the owners - has what appears to be a Model 18 engine in most respects. The machine in Ian Paterson's Cinder and Shale museum in Scotland is a replica put together in the nineties although part of the frame may be genuine. Ian's model, down in Devon, came from the Cinder and Shale collection and seems to have a Model 20 head but Ian has kindly said he will make a note of the engine number when it is next taken down from the shelf in the building housing his collection of over sixty Nortons.

Then there is another in the Netherlands - of which recent photographs are attached above. Here again the engine seems to be composite - 1930 Model 18 crankcases and 1930 Model 20 head. However it appears still to have the original special CS gearbox which has been the subject of earlier postings.  Let me stress that DT flywheels will fit straight into the 1930 Model 18, 19 or 20  crank cases and it is of course possible that any or all of these machines still retain original steel flywheel assemblies. However, the magneto chain cover was considerably shorter (more than an inch) on the DT engines, a feature I think visible on only the the Haynes bike and 'Cinder and Shale' replica.

As far as surviving engines are concerned, there appears to be two (not complete) in New Zealand, one I have recently heard of in Australia and one, possibly two, here in UK. I say 'possibly two' in UK because the then owner of the Haynes bike also had most if not all of a genuine engine as well.  After his unexpected death at an early age, his widow had a visit from someone offering to 'clear out' his accumulated motor cycle stuff of which she had no need. The DT engine was part of the lot and it is not entirely clear if this is the other known UK engine or yet another.

If anyone has any more input on these rare Norton models, please get in touch!
Newer Post Older Post Home