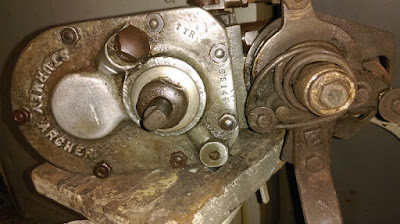 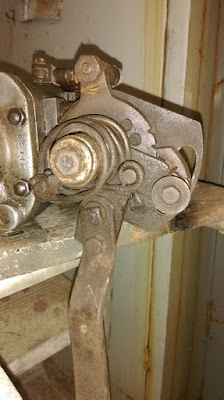 -SG- Last Autumn we received photos from Australia of what at first sight seemed to be one of the early twenties racing CS four stud gearboxes without the usual casting extension holding the kick-start mechanism. Very few of these survive and it appears they were initially fitted with the so-called 'fine pitch gears' (pairs add up to 50 teeth), with first gear in the central position thus giving 'semi positive stop.' 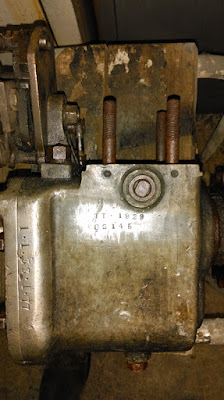 But this has turned out to be a bit of a mystery for the good and simple reason that, despite its early twenties shell, the box is stamped up '1929TT' and the stamping appears old enough actually to date from '29. Further it is fitted with a positive stop footchange, some parts of which are Sturmey and some either home-made or from some other foot change mechanism, mounted on the inverted T bracket used on all Norton CS boxes in '29. 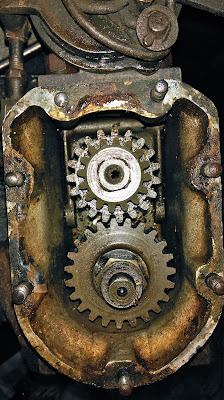 To cut a long story short, the box is now back in UK and I have had a chance to take a look at it and its new owner, a friend of mine, has told me about its internals (he knows more about these boxes than most). Internally the gears and shafts are all as new and of the post 1925 'coarse pitch' type (pairs add up to 42). The sleeve gear is the usual 25T CS item and second gear - in the normal mid position - is also the usual CS close ratio option of 20/22T. But bottom gear is very unusual - with a 19T gear on the mainshaft and 23T on the layshaft. For what it's worth this gear-set will give very close intermediate ratios of - assuming a top gear of 4.5 -1 - 6.03 and 8.01. 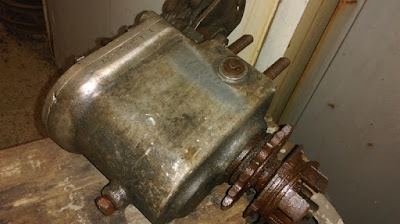 The mainshaft incidentally is normal for 1929 too, with splined single spring clutch fitting. The final drive sprocket however is not usual being a flat 5/8 x 1/4 item usually fitted to the pivotal LS boxes used on CJ and JE Models. This sprocket usually lines up with a flat rear wheel sprocket on the 350 models.

So... was it fitted to a Norton at some stage as original equipment? I don't know! I checked through all OHV models shipped out in '29 and early '30 and there was no sign of it in the 'Gearbox Column'.  Then I checked my SA literature and perhaps, just perhaps, there is a slight clue there. A special racing gearbox is listed in the 1930 price list supplement, suitable only for Models 18,19 and 20. The shell and cover part nos. (CS123 and 124) are given but neither of these is stamped on the box from Australia. However, it does show the special high bottom gear of 23/19, but, somewhat irritatingly, this is shown only as being in the mid position rather than in the usual low gear position! So in terms of solving the conundrum, I am not that much further forward. Perhaps it was ordered from Sturmey Archer direct for some sporting purpose (dirt-track??) - who knows? Suggestions more than welcome! 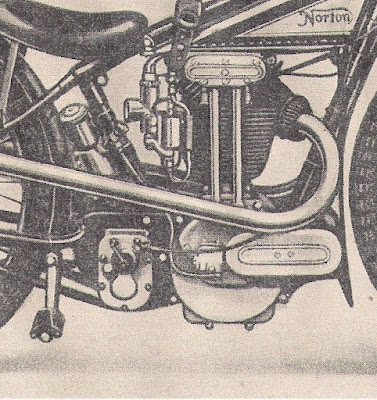 postscript: There's nothing like asking a question and then finding the answer oneself! Looking at my papers re Speedway Nortons, I glanced at a period - and rather retouched - Speedway Norton publicity photo. And the gearbox in it? The same type as the one pictured above - see scan.  However, a double check on gearbox numbers for the production Speedway Nortons showed that all had LS boxes fitted. So this ex- Australia box was perhaps a special order for Speedway use?
Newer Post Older Post Home