-JdK- Olav and his Norton have featured on this site before and while he's enthusiastic about our favorite brand of motorcycle we don't want to miss this story; in his own words:

"I was going to the UK after visiting my parents in France on a trip that had taken me 1700 km already. Fifteen km before Dieppe disaster struck; suddenly all power was gone, I pulled the clutch and rolled to a standstill. I should not forget to mention that the engine sounded like a bag of stones. 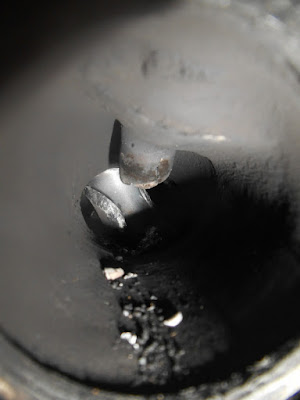 A quick mechanical checkover confirmed what I thought had happened. Have a look at the pic above and decide for yourself (clue; this is the exhaust port and I can't see a valve). Off course I'm not a member of any Recovery Service and I started pushing the bike to the nearest village that turned out to be miles away. I quickly got tired of this, pushed the bike in a ditch, covered it up in hay and made my way home via hitchhiking and trains to Rouen, Paris, Maastricht.  Eleven hours later I crossed my front door. 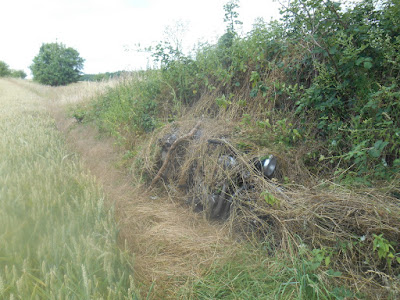 The next day I took my Toyota Starlet to collect the bike that was now 420 km from home, laying in a ditch. Unfortunately, while the Toyota has a tow-bar, the clutch is worn and slipping and it therefore doesn't pull a trailer. 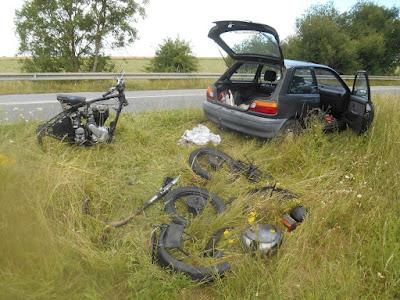 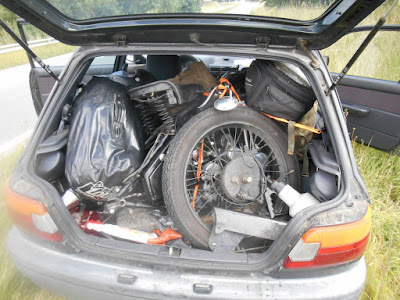 When I arrived in Longueville sur Scie the bike was till there; I pulled it from the ditch in a burning heat and covered in flies, sweat and oil took the bike to bits and after a lot of pushing and swearing managed to get it into the back of the car. Fortunately the Toyota and it's clutch got me home.

So my advice; do not buy an OHV Norton, it's rubbish!"

(Note from JdK: we do need to mention that Olav does more miles on his Norton in one week than most of us in a decade)