-SG- I recently heard from Barry in Yorkshire, whom I have known for longer than either of us care to remember.  He has carried out quite a number of good vintage Norton restorations over the years and was prompted to get in touch by the recent posting of the 1933 Model 50. He writes:


"The Model 50 on the site reminds me of my first Norton – a 1934 Model 50 with four speed SA box and tank gear change. How I came by it is perhaps worth relating. Back in the late fifties, when I was doing a bit of trials riding, we used to practice on a farm nearby, owned by a couple of ‘hill-billy’ brothers.  They used to watch us throwing ourselves at the countryside and used the Model 50 as every day transport.

About ten years later, when I got interested in older bikes, I went to see them.  They still had the Model 50 in a shed which had nearly collapsed onto it and they actually gave it to me. Luckily the plug was still in it and believe it or not, after cleaning and drying out the magneto, it started and I rode it down to the back lane where I lived. 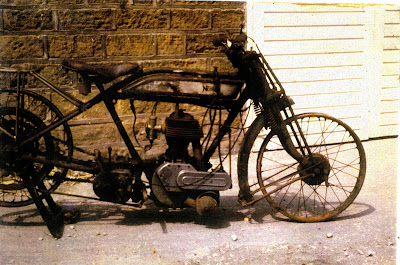 I did nothing to the engine or gearbox – just painted it and used it for a few years until I got the1923-ish 16H, my first flat-tank Norton.  I believe it is now in Australia. (see photos)


The final photo I enclose shows the late Tom Potter – a Chelsea Pensioner – with my 1928 Model 19 in a field at the top of Sutton Bank in Yorkshire.  Tom had a flat tank Norton in Singapore early in WW2.  Needless to say it had to be abandoned when the Japanese invaded!"
Newer Post Older Post Home