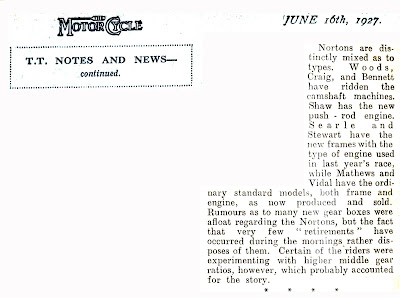 -SG- I am very grateful to Roger who has provided some useful input on this subject, discussed in our posting of 5th June 2016. He has done valuable research into the run-up to the event and has sent me excerpts from 'Motor Cycle' of 27/6/27, which are attached above.  One of these states clearly that Stewart and Ernie Searle would be riding bikes with the new type of frame but fitted with the previous year's engine. So, as far as Stewart is concerned, not one of the OHC machines atall!  As Roger somewhat drily commented, had he been the first to ride an OHC Norton in the TT he would also have been the first to fall off one!

However, from the technical standpoint, it does not seem quite as 'cut and dried' as Motor Cycle's report implies. The 1926 engines, fitted to flat tank frames, had the magneto out the front, driven from the exhaust cam spindle, and the engine fitted to Stewart's bike has it in the 'behind the engine' position,  driven from the supplementary sprocket threaded on to the engine mainshaft,  behind the primary drive sprocket. This alone means the drive side mainshaft would have had to be of the 1927 TT type and rather than  changing the mainshaft (a tiresome job as I discovered for myself some years back). I would think it far more likely that the entire flywheel assembly would have been of the 1927 TT type. Then there's the timing cover - this is not of the '26 type but in appearance is the same as that fitted to the other 1927 works OHV TT bike  (Shaw's) of which I have a photo. In view of these points I suggest the 'bottom half' of the engine in Stewart's machine was more likely to have been the same as that used in Shaw's bike. What is of course indeterminate is whether these engines were fitted with the regular long dwell racing cams used in 1926 or the small base circle ones used on production ES2s when they came along in the Autumn of '27. These cams and followers are not interchangeable and will only fit timing chests designed to take them. Perhaps Shaw's engine had the later type and Stewart's/Searle's the earlier variety.  Who knows!

I specifically referred to the 'bottom half' of Stewart's engine above but what of the 'top half?' From what I can make out from the one and only photo I have come across, normal conical push-rod return springs are fitted and, going just by reflected light on the exhaust pipe, the head has a straight exhaust port - all as 1926.  The engine in Shaw's bike however has enclosed push rod return springs as fitted to production ES2s while the head/exhaust set-up is not shown in my photo so I do not know if the port was angled to the left (like the CS1s and production ES2s) or not.
Newer Post Older Post Home