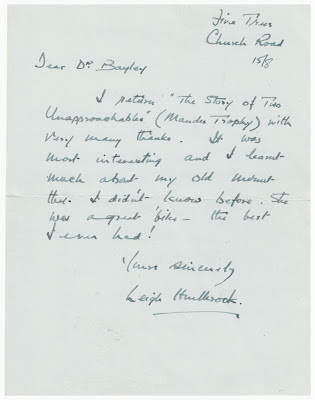 -SG- 'The Classic Motorcycle' recently printed an interesting article by regular contributor Richard Rosenthal dealing with Norton's Maudes Trophy achievements in the mid twenties. This reminded me that I have a small booklet published by the factory in, probably, early1926 which is entitled 'The Story of Two Unapproachables.'  This details the 1925 activities which won the Trophy for the third year in succession.  The booklet in itself is not that much of a rarity but there is a background anecdote as to my copy:  it was given me by the late Dr Joe Bayley (author of 'The Vintage Years at Brooklands') and with it came a letter to him from a chap called Leigh Huilbrook, who later owned the Model 18 used in the 1925 tests. Leigh describes it as the best bike he ever had!
Newer Post Older Post Home