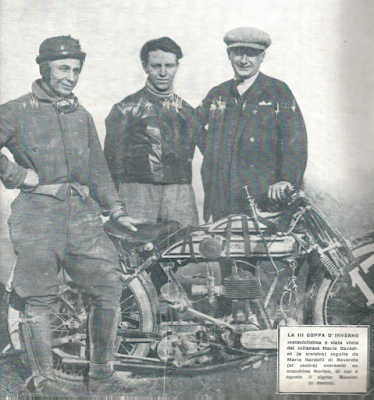 -JdK- Tino in Italy sent this cover photo from the March 1922 issue of "Lo Sport Illustrato". The rider (on the left) is Mario Cavedini, the Norton is a model 16H. Note the position of the oiltank, on top of the fueltank.

-SG- Mike has been in touch re the oil tank on this 1922 racing 16H.  He writes: 'Some years ago, when visiting Eric Biddle at the Squirrel Hotel in Bolton (Eric was an avid Norton collector), there was an example of a seemingly identical tank on a shelf above the bar, with a note on it, asking if anyone knew what it was off. A long time waiting for an answer!'

This leads me to the view that these were perhaps special tanks made for the works and the Italian Norton agents were able to obtain one. I don't recall what happened to Eric's collection - perhaps someone will tell us - but the Squirrel Hotel was demolished around 2010 and new houses built on the site.
Newer Post Older Post Home