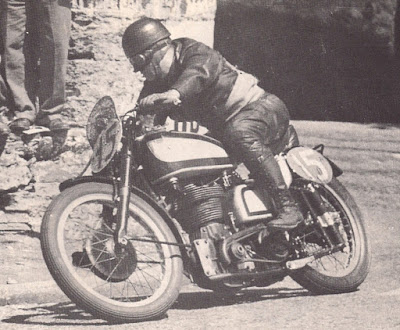 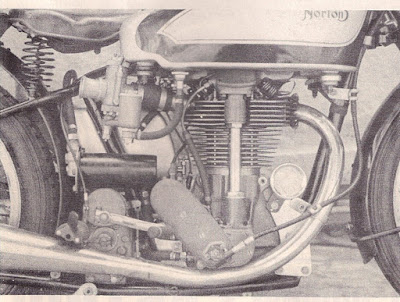 -SG- Harold Daniell needs little introduction to pre-war Norton enthusiasts. He started in the MGP on his privately owned CS1 in the early thirties (he won the 1933 Senior MGP) and then had a spell riding works AJS machines in 1934 - 1936, with only moderate results. His fortunes changed in 1937 when he rode Steve Lancefield's Nortons in both the 350 and 500 TTs, finishing fifth in both. For 1938 he had a works ride and became a legend with his 91mph lap in the Senior, which he won at a race record of 89.11 mph. The two first two photos above, showing his 1938 Senior works machine, come from a Castrol publication of 1967, while the third - rather fuzzy - shot below shows him on his Junior mount on which he finished fifth. 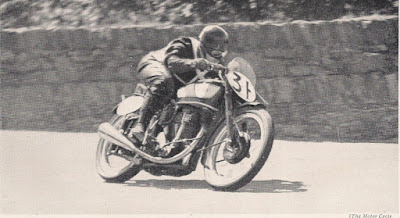 Speaking nearly thirty years later, Harold was not that complimentary about the 1938 works machines, saying that they were very heavy and the undamped telescopic forks did little to aid the 'unapproachable' image. While it may be a touch embroidered, I was told by H H Beach back in the early sixties (the Norton agent in Great Portland Street, London who was much involved in Norton's track activities in the early twenties)  that he obtained a set of BMW telescopic forks at Norton's request in 1937, on the basis of which Norton's own telescopics were produced ...
Newer Post Older Post Home