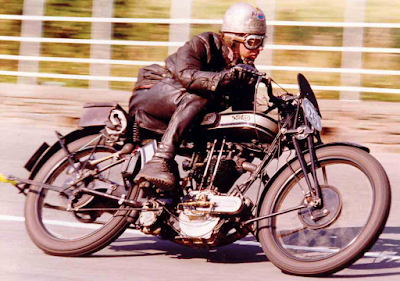 -SG- Sorry to learn that Dr J C Cohen ('George' to his many friends in the motorcycling world) died at the end of May after a long battle with cancer.  'George' was a flamboyant and in some ways, larger than life character and his well-known interest in single cylinder Nortons goes back a very long way.  He joined the VMCC in 1980 and bought his first flat-tanker in 1986. He became the Club's Norton marque specialist some ten years back, when Wally Flew gave up the post. He also did a short stint as editor of the NOC magazine 'Roadholder' and his major written work was probably 'Flat Tank Norton' which came out in 2006.

His comprehensive rebuild of the so-called 'Fowler 1907 TT machine', for the National Motorcycle Museum, was a major challenge. All credit to him for completing it/getting it up and running - and for personal reasons which do not need discussing here - declining to get involved in discussions as to its originality or other-wise!

I understand that his funeral is scheduled for 12 0'clock on 10th June, at the church next to his home in Chillington, Somerset.
Newer Post Older Post Home