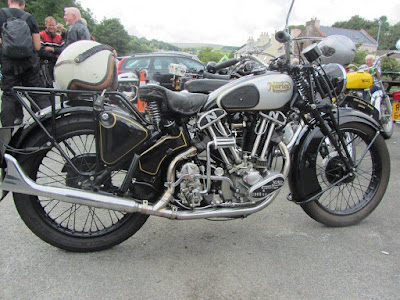 -SG- Here's another bike which rather falls into this category - labelled on the tank as a Norton Superior, it apparently has a pre-war 16H frame/forks/gearbox, and a Matchless twin engine from a Morgan, considerably modified. Altogether a testament to the ingenuity of the owner, it was photographed by Alan recently in the IOM. Further, it featured in Classic Bike magazine in March 2014, having won an award. 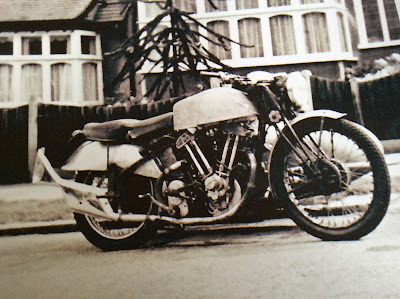 It is however not the first of such specials: my good friend John built such an engine into a 1938 plunger Norton frame in about 1960. He attached a side-car and a small group of us (two on solos plus another Norton outfit) toured Ireland in - I think - 1961. The Matchless engine had been re-bored and tightened up a few times. None the less, it was all good fun and the bike was sorted out when we got back home. It later served John and his wife as transport on their Honeymoon and. in case anyone asks, the bike no longer exists as a whole - the engine went to someone in the Brough club several years back and the frame is now in Kent, having care lavished upon it. A photo of it is attached in its Honeymoon Express guise. Thanks to both Alan and John for the photos!
Newer Post Older Post Home