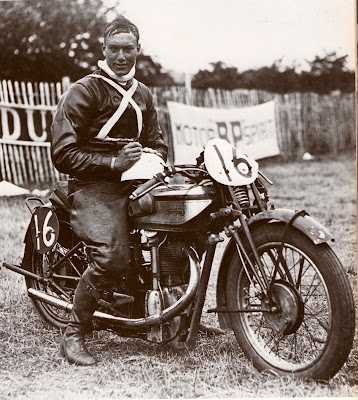 -SG- Norton's Senior TT efforts in 1929 were not exactly covered in glory, only one works rider finished - Hunt in fourth place after taking a tumble. Woods also fell and retired - probably riding  OF166 (see earlier postings re this machine). Douglas Lamb, also on a works bike, was unlucky enough to die in a crash on lap one and Ted Mellors, Jimmie Simpson and H Matthews also retired.  I think there were two other private Norton riders - Pilling and Griffiths - who also failed to finish.

Some years back the late John Sims sent me a 'copy of a copy of a copy' of the photo above, now received from elsewhere in rather more legible and presentable state! It shows Hunt after the race  with a few minor grazes on the front mudguard and a bent front number plate. His footrest seems to be missing or badly bent also. But more importantly, it shows clearly the 7 inch Horton front brake used on the works bikes in '28/'29 as well as the right-hand exhaust port head and the inlet port slightly angled to the right. Note the timing cover still shows the oil level adjuster which was omitted on the works engines produced later in the season (see Gardner engine details etc).
Newer Post Older Post Home