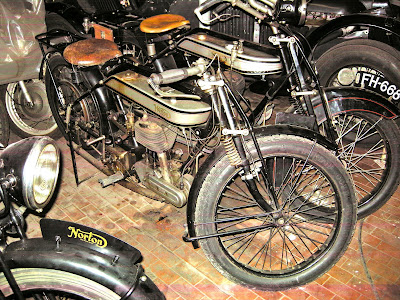 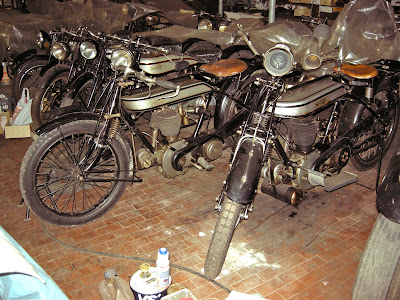 Dodi in Italy sent these pics of his 1921 Model Big Four and 16H Nortons. Dodi: "The Big Four has engine number BA17XX and frame number 35XX. I bought it 15 years ago via the late Doug Barker. The 16H has engine number BA20XX and frame number 10XX or 40XX. The 16H spent all it's life in Italy. Bought by my late uncle (lifelong motorcyclist and Norton fan) in the early '60s when he started to build up a large collection. It has adjustable tappets (not so the Big Four), hand pump and no drip feed. Can anyone tell me what the BA suffix is for? Perhaps a short-lived attempt to mantain the "year" suffix, as used up to 1920, in a less confusing way, using letters (A=1, B=2) instead of digits?"

-SG- Both Nortons look very nice but unfortunately the factory records which exist don't start until late 1922 so what information is available prior to this has been arrived at by details being gathered of existing bikes with known manufacturing histories. This was carried out by a friend of mine over a period of quite some years but is by no means 100% correct. The BA prefix letters in the engine number appear to have been used only for 1921 machines and no one has any ideas what they stand for! Your suggestion may well be right but at this distance, difficult to say!"
Newer Post Older Post Home