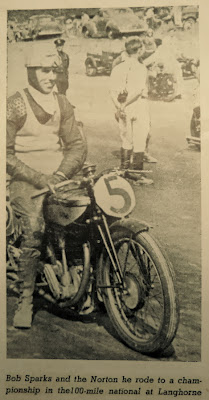 These cuttings (contributed by Barry) from 'The Motorcyclist', October 1939 are about the big annual race in labour day weekend at Langhorne, Pennsylvania, notoriously the most dangerous dirt track in America. The race was won by Canadian Bob Sparks on his Norton. Bob was from Windsor Ontario and he and his brother Bryan were avid motorcycle racers. Bob survived the war but Brian died in Burma. They raced Velocette and HRD as well as Norton.