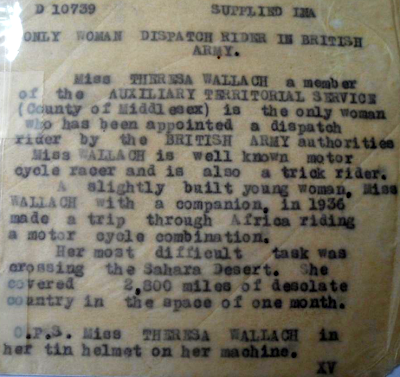 -JdK- Miss Wallach again in what is said to be a WW2 press photograph. Theresa may have been a despatch rider but this is not the usual Model 16H! It looks like a trials version of the Model 18. Note the 21" front wheel, the narrow girders and laced-in front hub as used on the M30/40 Nortons. Further, many parts have been chrome plated; guards, brackets, primary cover, brake anchor plate, gear lever ... FOC531 was issued from 1939 in Birmingham.
Newer Post Older Post Home