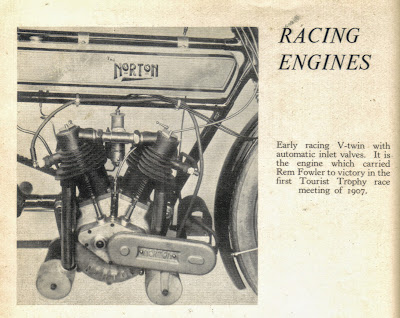 -SG- Back in the distant past I took two books out of the local library by L R Higgins 'Private Owner' (quite a good read) and 'Britain's Racing Motorcycles'. A couple of weeks back, I happened to see the latter at an autojumble and bought it for slightly too much money, bearing in mind its mediocre condition. Considering when it came out (1952) it's not a bad overview of the subject. However, just to show that errors in printed matter cropped up then as well as now, I attach a scan from it of an early Norton engine. It is incorrectly labelled as Fowler's 1907 engine, when it has NORTON cast into the crankcase as well as a magneto chain cover and as I understand it, dates from 1908/9. It is usually described as Norton's version of the Peugeot vee twin.
Newer Post Older Post Home