-SG- A couple of engines SOLD for sale at the Netley Marsh event yesterday - now rather grandly describing itself as a Eurojumble. I have checked this morning with the stall holder, Greg, and they are still available. 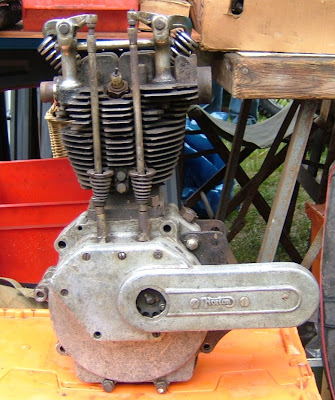 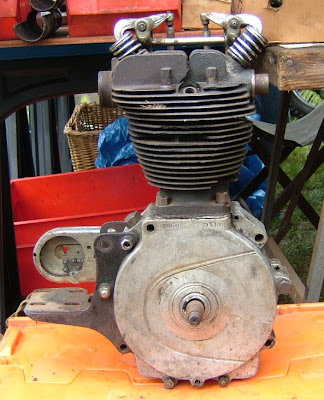 The first is a Model 18 from April 1926 - looks a bit sad with some damage to the drive side crankcase (probably repairable) and plenty of fins in need of attention. Judging by the size of the drive side mainshaft and nut, I would not be surprised to find it has later Norton flywheels in it but it is pretty well all there as far as one could see from a cursory examination. Incidentally it has a 1929/30 front engine plate/magneto mount on it so has seen service in a later machine at some stage. Asking price is £2200. 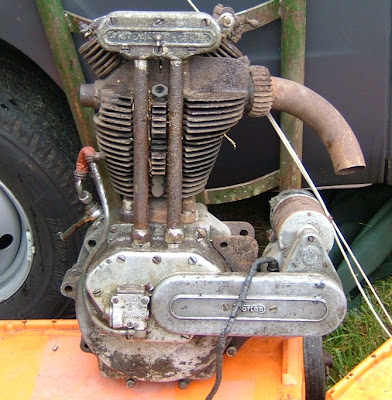 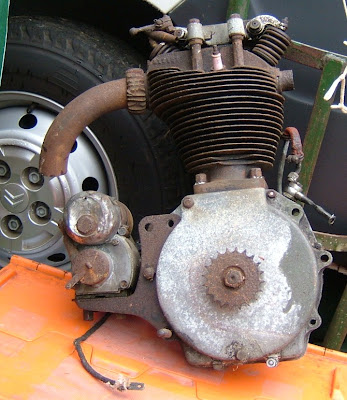 The second, a 1930 Model 18 from June 1930, looks in far better shape despite superficial corrosion and there is minimal fin damage. It even rotates,  the valves operate as they should and the exhaust valve lifter is still in place. Crankcase and barrel have matching numbers and the oil pump is still in place as is the crankcase breather. This too has a front engine plate/magneto mount and includes a somewhat later magdyno. Asking price is £1800.

Ken has sent us a message about this engine pointing out the 1929 type barrel (the boss to take the pushrod return spring bracket is clearly visible on the barrel). It seems the factory used up their stock of these barrels on the 1930 models and in some cases used up earlier heads as well - even welding up the earlier rocker standard holes on the head.

Greg does not have a computer but we have his phone numbers and will pass them on to anyone interested.  He is based in Horley, Surrey (not far from Gatwick).
Newer Post Older Post Home