-SG- We usually try to stick to our pre-1940 dateline but there are exceptions to every rule and this is one of them. 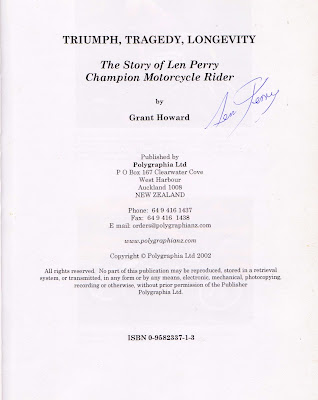 Len Perry is a well known name in New Zealand racing circles - he died in 2002 aged 90 after an active and successful competition career. His biography 'Triumph, Tragedy and Longevity' by Grant Howard - is worth reading for those with an interest in racing 'down under ' and Artie has sent us the following story:


Len and another New Zealand (NZ) 'great' Rod Coleman, were New Zealand's representatives for the 1951 TT. Len was already successful enough and lucky enough to be allocated a Junior and Senior mount by Nortons, while Rod - with an AMC contract for the Junior - only had a Norton for the Senior. Len acquitted himself well, finishing 9th in the Senior and 25th in the Junior - a trifle delayed due to the exhaust pipe falling off. He was awarded the prize for the 'Best Colonial Rider.' He used the same machines for various continental races with considerable success, before heading back to NZ as the birth of his first child was imminent. Len assumed that he would be able to buy both machines from the local NZ Norton outlet - Whites of Auckland - to whom they were shipped. He had visions of cleaning up in the ensuing NZ racing season. He was thus pretty cross when Bill White sold the bikes to a chap named Swarbrick - aka 'The Flying Milkman' - from Christchurch, who used the bikes to good effect. Bill White did get Len a pair of Manxes for the 1952 season but he always reckoned they were 'dogs' compared to his works bikes. It is a measure of Len's riding ability that Joe Craig offered him a contract for 1952 - regretfully turned down due to family and business commitments.

It so happens that Artie - amonst other Nortons in his stable - has a 500 Featherbed Manx, which he bought initially as a rolling chassis in 1967. He checked out the frame number with Nortons and it turned out to be the very machine which Len had ridden in the '51 Senior. In more recent years he has also acquired the original engine and plans a rebuild as a 'retirement project' ... the very first Senior Featherbed Manx to reach New Zealand. Artie tells me Len Perry's Junior TT mount still survives although apparently it is now a 500.
Newer Post Older Post Home