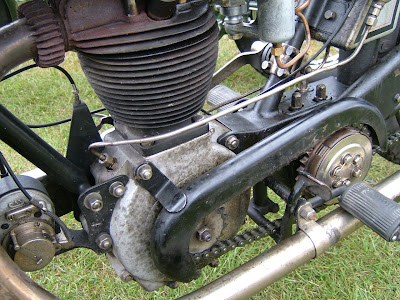 -SG- About fifteen years back, I advertised a basket case Model 18 which comprised a 1929 frame and about 95% of the rest of the bike. I sold it to a chap in Germany within a couple of days but one of the 'too late' callers was Colin in the UK. In the course of conversation, it transpired that he had several Nortons already, including a 1924 Model 18 which was originally supplied direct to the Binks Carburettor - or Carburetter, as it was called back then - concern. In the intervening period of time I have been meaning to invite myself to go and see it but just have not got round to it. Now I don't need to: Colin had the bike at the VMCC Founder's Day event on 21 July. The photos provided show something of it although it was rather hemmed in. It is used regularly in rallies in UK and Europe, I am glad to say. 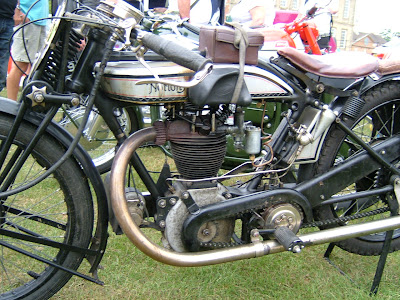 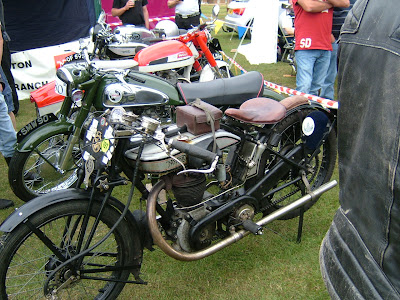 The engine and frame numbers match and the recorded date of despatch was 13 March 1924. The tyre sizes and the magneto number are given and the slightly less than interesting comment in the 'Extras' column: 'Carrier.' At this stage, information in the despatch books is pretty sparse and it does not, for instance show the fact that it was fitted with a racing gearbox with no kick start and with first gear in the mid position! Colin still has this box but for ease of use the bike is currently fitted with a normal CS gearbox with kick start. In my view it is likely to have been shipped out with a dummy belt rim rear brake rather than the '25/'26 type drum currently in place but many survivors from this period in the twenties seem to have had later brakes fitted and for general use as personal transport, it would have been a sensible move. It retains the supplementary oil pump pedal on the right of the machine - yet another item clamped to the short tube below the gearbox lug. A top of the range Bonniksen speedometer is also fitted. 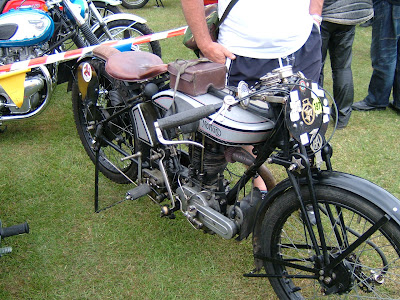 I was slightly disappointed to see that it is not in fact fitted with a Binks carb. but all in all, a highly desirable machine!
Newer Post Older Post Home