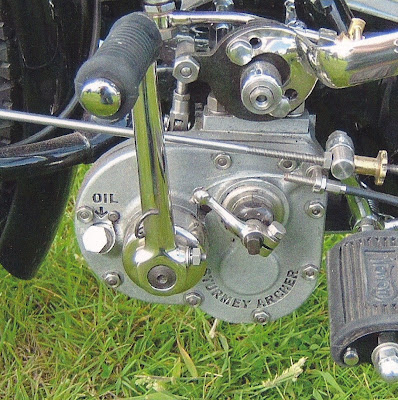 -SG- The recent photo of the restored 1930 Model 18 has prompted me to write a few lines on the Sturmey-Archer CS gearbox used ONLY on 1930 models. So what’s different about it? First there were three versions of it: the one shown in the photo with the gearchange mounted on the bolt-on inverted Tee bracket. Note that the actual gearchange arm is on the back of the gear box. The second version also relies on the bolt-on Tee bracket, but has the arm mounted on the front of the box. This necessitates a different gearchange quadrant and a different arm while the lever movement when in use is reversed - ie ‘up’ for downward changes. The third version has no gearchange bracket or studs to accept it on the casing and has a relatively long gearchange arm mounted on the front of the box - for connection to the fashionable tank-mounted gate type gearchange. Incidentally, versions of this box fitted to Model 20s, had a longer kickstart axle and bush so that the kickstart lever would clear the right hand exhaust pipe.

Then there's the end cover casting - the quality of which has been considerably improved - and the Sturmey Archer lettering. This is very neatly and precisely recessed rather than embossed as in the previous five or six years. (Seemingly 1924 and earlier boxes also had recessed lettering but not in quite the same precise style.)

And what’s inside? The actual driving gears are the same as those of post 1925 CS boxes - the so-called coarse pitch gears with numbers of teeth on each pair adding up to 42. The kick start axle however is considerably different. It is larger in diameter and is, in fact, a component from the LS range of S-A boxes but fitted with a short press in stub axle on the inner face. Use of this LS part meant that the actual kick start gear had to be different from previous years and it is not interchangeable with the earlier versions.

A final word about the gearbox in the photo - don’t take too much notice of all the shiny bits: over-enthusiastic work by the restorer or use of inappropriate stainless steel! The cover nuts, clutch arm (actually suspect this may not be the correct one anyway), kickstart spring cover, gearchange spring cover, gearchange link/clevis and the clutch cable-stop should all be chemically blacked ...
Newer Post Older Post Home