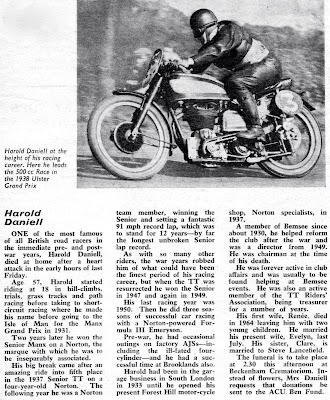 -Roger- An obituary from 'Motor Cycle', 26 January 1967, reporting the death of one of the most famous Norton racers, Harold Daniell.

-SG- Despite what it says in the obituary, the Shell History of the MGP says Daniell competed in 1930 for the first time, on a Senior Norton (retired) and then tried again in 1931 on ostensibly the same bike which had been updated by the works with a new two stay frame etc. Again he retired. Then in 1932 he was second on a Senior Norton and in 1933 he was first on a Senior Norton ... by which time the powers that be noticed he had talent and the rest, as the saying goes, is history.
Newer Post Older Post Home