-Andy- I got this project about 18 months ago and now it's almost finished. It’s a 1934 Inter frame with a 1936 engine and 1939 forks. According to the Works records, the engine left the factory to full Manx specification. Because of this I aimed to restore it to look like a racing bike of the day, as well as making it comfortable and useable. I have retained the Manx cams but have set it to road bike timing and used a lower compression piston. It starts 2nd or 3rd kick and goes very well! 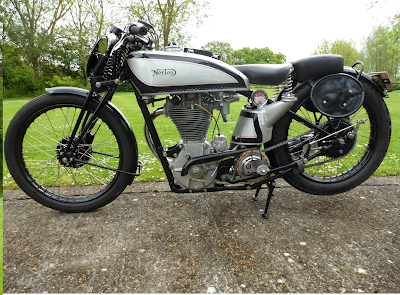 -Richard- The engine does look to be an early 1936 racing specification type. By the time the TT races  for 1936 came most racing Inters had magnesium engines. The crankcases on Andy's bike are the racing alloy type and if you look closely you can see there is no oil tell-tale as there is on standard Inters. The cambox is also aluminium but has a magnesium bevel cover which has probably been fitted at a later date.

In general this bike will pass as a 1935 model as the engine was available then and the standard frames were the same for both '34 and '35. The Norton gearbox and the petrol and oil tanks are also O.K. for 1935. The only major parts which are not quite in period are the 1939 forks (rubber mounted handlebars and right-hand side brake) and front wheel, which should be the narrow type, and the later carburettor; but as Andy says it's good he has got the bike together and is using it.
Newer Post Older Post Home