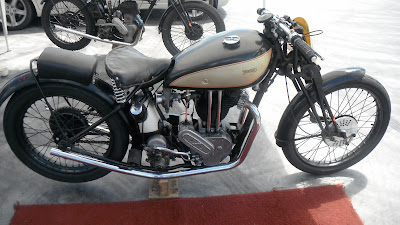 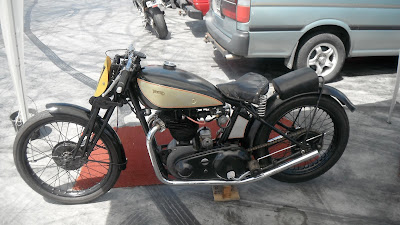 -SG- Artie has been competing at the NZCMRR race meetings for more years than he probably cares to remember and in recent events, one of his mounts has been a Model 22. This has been assembled out of parts gathered along the way over time but the power unit is basically 1931 and the frame mid thirties ES2. The frame in particular has a history attached to it. It belonged to the late Len Perry - one of New Zealand's racing greats - and was used for dirt racing in the fifties and sixties with a sidecar attached. The modified and extended  forks - as Artie said "a bit crude but effective" - date from Len's period of ownership, when it was powered by a Speedway JAP engine and was called 'Buster.' Putting the front wheel spindle way ahead of its usual position improved handling with a chair attached and Len won many races in his time with it.
Newer Post Older Post Home