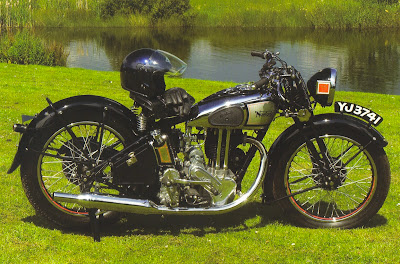 -SG- I was about to throw out the 2012 VMCC calendar when I remembered this photograph of a - to my biassed view - somewhat glossy restored 1936 Model 50. I have no problem with re-plating if a full re-build is considered necessary but am not too enthralled with polished crankcases and gearbox end covers. Such niceties in the days when this bike was produced, were seemingly restricted to bikes actually shown on the stand at Olympia. However, it has been in the same family since 1948 and after giving good service for over ten years, was dismantled and stored until 2007. It is nice to see nothing appears to be missing and if it goes as well as it looks, it should provide an interesting ride. Hope it get's used!
Newer Post Older Post Home