-By John Cooper in Canada- Here is a sequence of photos illustrating the life to date of my 1930 Norton ES2, of which I am the second owner from new.


The first of the black and white pictures  (above) dates from the spring of 1930 on the day when John King Moffat III took delivery of his new ES2 from the local Norton dealership in Toronto, Canada. I believe the dealer was Walter Andrews on Yonge Street. John was 18 years old and a keen motorcyclist, which he remained all of his life. He was avid follower of the IOM TT and other races, and his selection of the ES2 would have been prompted by Norton's racing success. His family were the prosperous owners of the Moffat Stove Company, which produced the first electric cooking stoves in Canada for domestic use. John's grandfather was a foundry man who had emigrated from Glasgow in 1869. The Moffat family operated the business until 1953 but the name is still attached to domestic appliances in Canada today.


The photo above was taken a year later in the Toronto suburb of Weston in front of the Moffat family home. John poses in his white cotton jump suit with his father before riding north to the family cottage on a lake in central Ontario. The cottage is still in the Moffat family's ownership today. In the background is the family's new Cadillac V12 convertible, a model newly introduced in 1931. The driver side door is open as presumably Mrs. Moffat has called her husband to step out and pose for a photo before the journey. By now the ES2 has sportier mudguards with chrome-plated stays and an accessory speedometer driven from a gear fastened to the spokes of the front wheel. The headlamp has been removed but the dynamo and its drive are still in place.


Photo 3 above was taken in 1947 in Kirkland Lake, northern Ontario, where the now Reverend Moffat was called as minister with the United Church of Canada. By now the ES2, shown supported by John's oldest son, also named John K. Moffat, is much modified. Note the discarded speedometer and dynamo, new abbreviated upper primary chain cover, exhaust megaphone on full-length pipe, fanciful competition number plate (John didn't race), George Dance knee grips, bobbed mudguards and liberal application of chrome plating to guards, fuel and oil tanks, probably done for free courtesy of the Moffat appliance factory. The inverted levers have been discarded and the handlebar shimmed down to 7/8 inch. The wheels have been painted silver, but later the rims were redone in red by the three Moffat sons as a surprise for Dad when he was away on a business trip. He wasn't overly pleased but hadn't the heart to change them back. 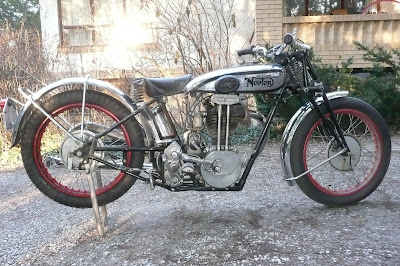 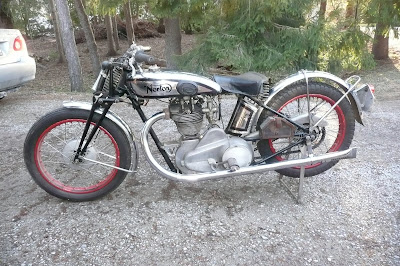 The colour photos show the bike as it is now. John Moffat kept his ES2 for 61 years, though he rode it relatively few miles. His busy later life as a family man and minister left him with relatively little time for motorcycling, though his enthusiasm was undiminished. For example, he also owned a '59 Manx Norton and a red Corvette convertible, and eventually several Honda sport bikes. John wasn't very mechanical, though. At some point the Norton's magneto failed and when I met him about 1975 the bike was in storage in a garage at the family cottage. Over the long years the original carburetor had disappeared, along with all the electrics and the original primary cover with the leg at the front to cover the dynamo chain. I substituted another magneto which brought the bike back to life. John and I would take the occasional summer weekday off from our work in Toronto and travel up north to his cottage, where we would open the garage and roar around the country lanes on the unsilenced ES2 and his Sunbeam Model 95 without benefit of lights, insurance or registrations. Not your average churchman!

I bought the two bikes from his estate in 1991 and since then have had the ES2's original mag rewound and recently found a more suitable carb. When I took off the wheels to replace the prewar tires (still with plenty of tread) I found the brake linings not even fully bedded in. I have resisted restoring the Norton to a more original condition, partly from indolence but also from a wish to preserve the legacy of John King Moffat III, a quiet and modest but very keen sportsman who loved motorcycles all his life.