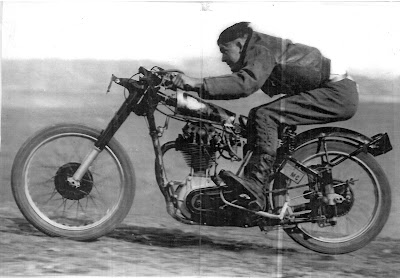 -An email from Michael in Fiji- I attach a photo taken circa 1954 of my Uncle Bob Thoms competing on his International, in New Zealand in the town of Blenheim. Uncle Bob had this bike in the late 1940s so I am confident it is a pre war model; I say that as with the post war models only coming available around 1947 I doubt we saw them in New Zealand until later. Add to that, Bob was in his apprenticeship years in the late 1940s and could not have afforded a new bike.

The tank is one Bob made himself for such events. The MC tag at the rear wheel is a New Zealand motorbike registration from those days.

I went for my first ride on this bike in either 1947 or 1948 when Bob took me as a pillion rider to a hill climb he was competing in, started me on a love of bikes that still endures. I still clock up around 20.000 clicks a year on my 1990 BR 600. I am in 72 year myself, Bob is still alive and still talks about his riding days.

-JdK- Michael and Bob would like to know more about the bike. Who can date the Norton more accurately?

-Roger- I would suggest that it is a 1949 road International judging from the headlamp brackets on the forks and the aluminium lower sliders.  Otherwise it could be a standard post-war garden gate frame with the road Inter engine which had iron head and barrel

-Richard- Sorry to pour cold water on the story but the bike is post-war. The headstock is devoid of the Andre damper anchor fitted to pre-war spring frame Inters. Also the plunger carrier forgings are different before and after the war and this one has the later type. A centre stand is fitted to the bike and although you could specify a centre stand in 1939, most spring frames left the factory with the suicide forward facing version. It is difficult to put a definite date on the bike. The headlamp brackets were the same from 1947 to 1952 and the finish of the fork legs could be purely cosmetic. The major changes in the late 1940s were the handle bar clamping, the front mudgaurd bridge fitting on the forks and the front brake plate, none of which are visable. The bike is definitely an Inter as the frame geometry differs a lot from the ES2 and my best guess is 1947-48. We should not be to surprised to see an Inter' in the antipodes as it was export or die in Britain and I guess uncle Bob could get hire purchase, new or second-hand.

-And from Michael again- Have established the following through my cousin a son of Bob: The bike was purchased brand new from Aero cycles in Blenheim in 1948 by one Kevin Freith and purchased by Bob from him, date as yet unknown, it was a 500 , manufactured in 1947.
Newer Post Older Post Home