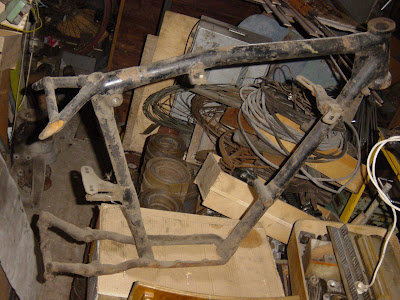 -By Juris in Latvia- I got my first Norton - a 1935 Model CS1 - back in 1973. The frame rear stays had been cut (above) and substituted with bolted on plunger suspension. The front fork was off a BMW - a telescopic affair with adjustable damping. The rest was more or less there, but I was not very enthusiastic about this project as it would involve a lot of hard work, know-how, parts and expensive materials, like silver brazing rod.

Last year I had a spell of enthusiasm and got down to work. I loaned the rear frame stays from a dilapidated 16 H Norton. Before those who know better start to argue that the rear stays from a 16H do not fit a CS1 - I hasten to add that I did notice that as I had a frame from a 1935 ES2 to compare! (The rear geometry of the ES2 and CS1 is identical bytheway). So some surgery was called for to shorten the 16H stays and to adapt them for use in the CS1. 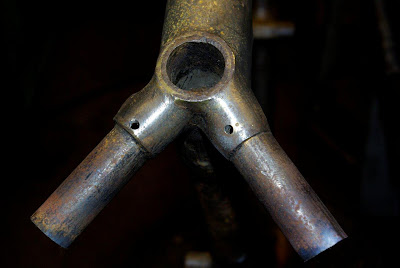 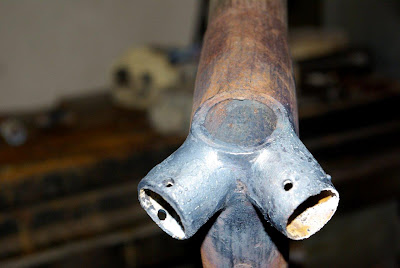 I had to take out the old cut tubing from the saddle lugs. This I did by drilling out the alignment pins and then drilling larger holes in the tubing so that these could be turned and quickly screwed/pulled from the lugs when heated red hot. Remember that these lugs do not like overheating, the flame, if acetylene, must be carburizing with little oxygen. 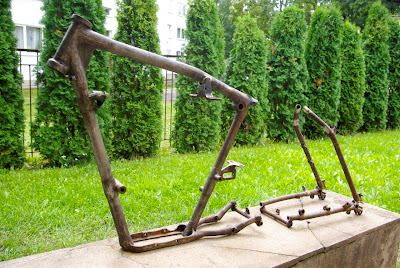 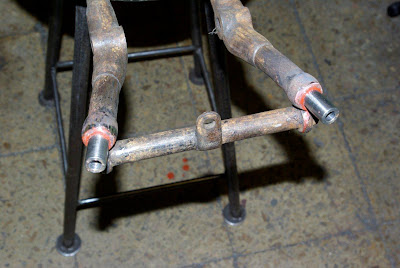 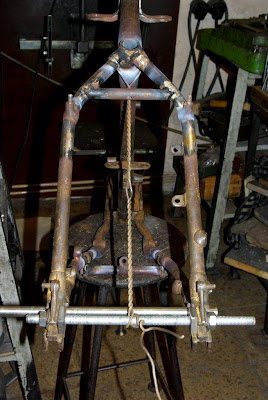 The cut lower-frame tubes were shortened and pieces of seamless pipe were inserted inside the old tubes. I measured and remeasured the frame parts and joined everything together using thick mild steel wire. Then I used new pins in the holes in the lugs to further hold everything tight. Before putting the tubes into the lugs I took great care to polish everything bright with sandpaper and to introduce brazing flux. I used silver brazing rod for most joints and as a last thing I also added SIF bronze rod where more body was required as silver would run too thin and too quickly. 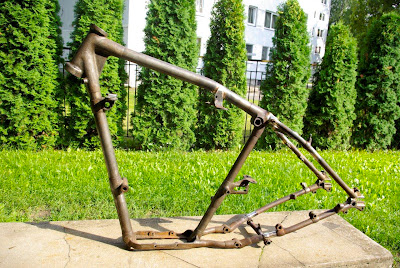 My friend who has a frame testing jig could not believe I had done the brazing without any jigs - just by measuring and testing by eye judgement. The frame came out straight in all respects! This must also be thanks to good luck as we can read that even after brazing frames in jigs in the factory they frequently required straightening...

There were some other minor issues with little bits cut from the frame which had to be rectified. Total time spent on this rebuild - 20 hours. So I now have a perfect CS1 frame and can rebuild the rest comparatively easy. If only I had the experience and know-how during my salad days when I was young and eager - this CS1 would have been rebuilt a long time ago... Pure nostalgia... Yet it is better late than never!
Newer Post Older Post Home