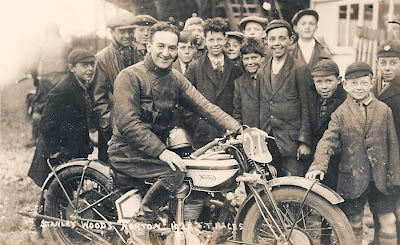 -Contributed by Tim- Stanley on a CS1 that we've seen before on this website, probably at the 1928 TT when he crashed early in the race but still finished in fifth position. Tim: "On the back Stanley has written "Photo taken while I was still a pup - 26 years ago - Stanley". This pic is one of my favourites, look at the kids' faces and the front of Stanley's helmet (Irish Shamrock motif)."

Note the cutout in the tank to clear the cambox and the large oiltank. In addition, the front brake - the 7 inch Horton with a cast back plate used on the works bikes in '28 and also the rear brake set-up with the lever pointing upwards - another works feature for 1928.
Newer Post Older Post Home