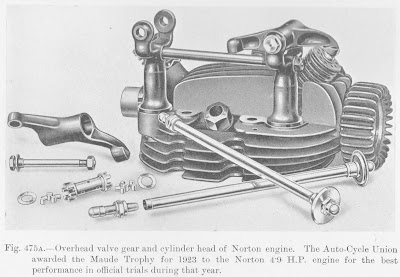 -SG- More on early heads! Leon in Australia has kindly sent this scan of the 1923 -1925 cylinder head, with straight rockers and push rods with adjustable ball ends. It came from 'Modern Motors' by H T Rutter (published in the mid twenties) but looks to be a creation from Norton's publicity people. Worth noting that no grease nipples are shown on the rocker spindles which I think is an artist's omission!

Regarding Norton's move to arched rockers and deep spring retainers. I think there were probably two reasons. Unreliable valve springs due to not-very-good materials available at the time. It was thought longer springs would be better. Further, the inverted cup on the rocker on the straight version allowed lubricant to drain out and the ball-end on top of the pushrod suffered as did the cup. Seals were fitted originally in this area but according to an old friend who had a 1925 588 (with straight rockers) in his early days, they were ineffective. Incidentally, arched rockers seem to have been first used on the 1925 works machines .
Newer Post Older Post Home