An email from Ben in the UK 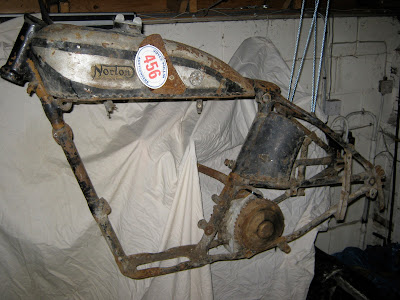 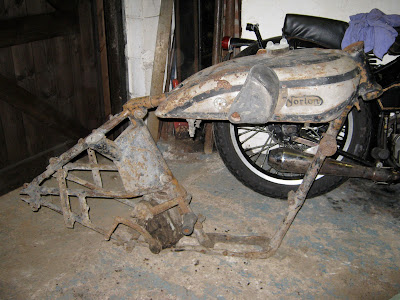 I purchased this Norton at a local farm sale, only 1 mile from my house. It has been in the roof of an old farm house that was converted into pig stys and then a chicken house. It had been there a long time. The now deceased farmer, Mr Wallis Margret, owned the bike since at least 1936. I have the tax disk from 1936 to 1942. He was a sporting rider who liked speed events and grass track. He was friends with Mead and Tompkinson who later set up a motorcycle shop and tuned Velocettes and Hondas. They used to knock about together.


The Norton was last taxed in 1942 which was when his first child was born and he had to get on with running the farm. I think he used it around the farm as the gearbox is caked in mud. Eventually it was taken apart and stored in the pig shed. What happened to the motor, wheels and forks is a mystery as his daughter doesn’t know. He was very good as a mechanic and made all his own farm implements. He also made four wheel drive tractors with his mate Curley out of Austin cars and trucks. I have attached a photo (below) of one of his efforts with a tantalising glimpse of the Norton at the bottom of the photo. 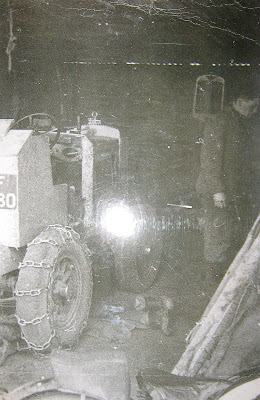 I would love to find all the parts I need to recreate this treasure and am asking for help to find some parts. It is a 1928 CSI. I have the; fuel tank, oil tank, frame, gear box, speedo, and rear light. That’s it, so I need; engine, forks, primary covers, wheels, brake pedal, foot pegs, and engine plates. Can you help me? My name is Ben Holyoake, I live in Gloucestershire, UK. My phone number is 07810825534. 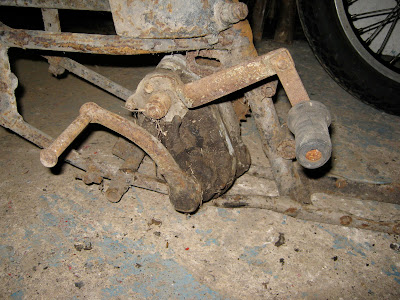 -SG- "What an interesting find and what a pity so many essentials are missing. The taxing of the bike during the war years may perhaps have been to obtain petrol coupons. What's there looks good and even the filler caps are in place. I have checked the records and sadly this machine is in a section where the handwriting of the lucky chap who had to fill the ledger in is so appalling that it's very difficult to read. The extra detail, over and above the frame and engine numbers which as expected match the log book entries is as follows: TT28 Webb Forks. 26 x 3.25 tyres. Binks Carburettor. Gearbox 134881. Despatch date 3/3/28 to a dealer whose name is illegible but I think it may be K Sword. Delivered to retail customer - also illegible - 31/3/28. There is some writing in the 'Extras' column but the only word I can make out is Lucas so it may have been a dynamo equipped model."
Newer Post Older Post Home