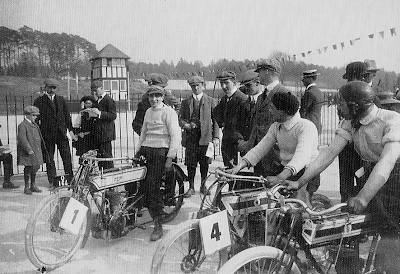 -George- The picture was taken at the easter meeting at Brooklands in 1909. From left to right: Pratt on a Norton, Godfrey on a Rex and Femi on a TT Triumph. The number plate on the Norton (O164) was the same as on Pa Norton's Big 4 combination!

-Roger- I can find no trace of a Norton racing at Brooklands before 1910 and I am not convinced that this was taken at a race meeting. The lack of spectators in the spectators' enclosure on the other side of the track supports this. In 1909 the BARC official events would have used colours for the identification of riders but all of the riders are wearing the same clothing. The Norton has the 1904 registration O164 which indicates that it was a works machine and it was in use by the factory for a long time.

-John- The Rex has been modified for use at Brooklands as the front forks are solid with no springing at all from a c1904 machine, even though the machine in the picture is either 1909 or 1910.
Newer Post Older Post Home