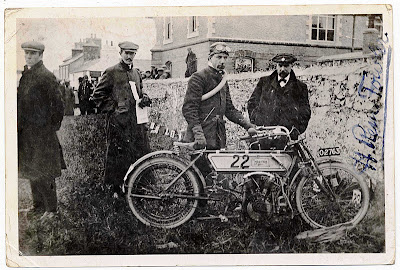 I was very close to Titch Allen for many years and remember him telling me he interviewed Rem many years ago for (I think) a Motorcycle Sport article. Anyway, after Titch died a couple of years ago, Steve Allen (his son) and I were boxing up some of his many photographs, and Steve told me to take any I found of interest. I found this photo (above), which I immediately recognised as a copy of the famous Rem Fowler shot, showing him before the race. Steve kindly let me have this.

Anyway, it was only when I got home and carefully examined the photo and the writing on the back of the photo that I realised that instead of the photo being a copy, it was in fact written in 'first person', and was actually the original photograph, with Rems comments pencilled in by the great man himself! On looking at the photograph itself, I realised that what I thought at first was a black smudge, was in fact Rem's signature running along the side of the photograph. Obviously, I feel very priviledged to be the temporary custodian of this extremely historic photo and treasure it immensely.
Newer Post Older Post Home