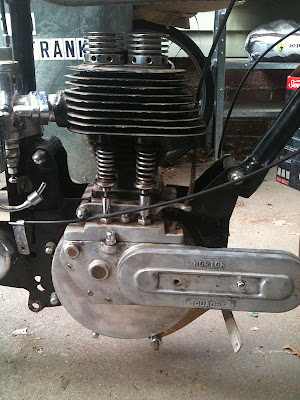 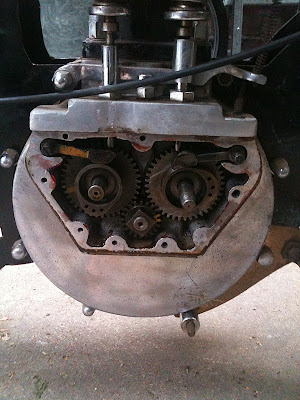 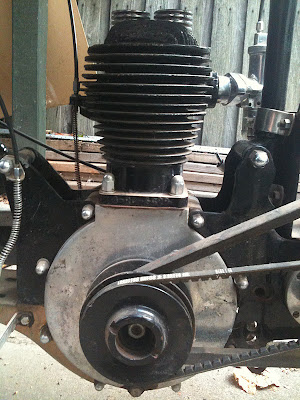 A note from Ben in Australia: I thought you might be interested in this engine which I have recently acquired. It looks like no Norton engine I have ever seen or can find a photo of. The words "Norton" and "QUAD-S" are cast into the magneto chain cover and there are no other markings that I have found anywhere else on the engine. I've never seen a timing cover which doesn't go all the way to the top of the crankcase and has the holes for the timing gear and valve lifter bushes bored through. The drive side of the crankcases is also quite different, especially the lug at the front which sometimes has the footpegs through it which makes me think that it may be very early. However the barrel has the appearance of something a little later. The engine also came with a clutch hub which looks like a ROC due to the live axle and starting handle! It does not appear to be a 2 speed hub however I assume all will be revealed once I dismantle it. In the rear hub the plated drum behind the belt pulley appears to contain the clutch plates. Any suggestions on what it is? 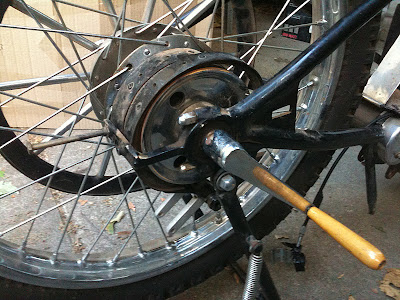 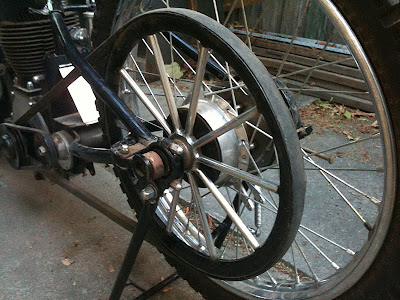 Martin: "None of it ever came from a factory run by Norton, except maybe a few timing chest internals. The contents of the timing chest appear to be correct for 1920 or earlier pukka Norton parts, with the screwed timing pinion with a square (not a hex) and presumably left hand thread, which suggests the flywheel assembly inside might also be early Norton.  But the entire crankcase and timing cover is crudely made with far thicker walls on the timing chest for example than originally, and the barrel is just nothing like the correct fin shape and each fin appears to have cold shuts around the edge of each fin, another sign of poor quality foundry practice. This is a complete modern lash-up, and the rear wheel free engine clutch has a touch of Japanese about it. It is perhaps fun, but even the earliest Nortons were well made unlike this one."

"P.S. Incidentally, in conversation with a pal in Adelaide, he said he believed that the Norton engine had been copied by one of the railway companies out there years ago to power little inspection trollies, and maybe this was the source of this engine, not a motorcycle."
Roger: "To be positive about it, the machine probably owes more to Norton than the Rem Fowler TT winner! However, there are some interesting features about the engine which as Martin has pointed out did not come from Norton. The timing cover casting is significant as someone has had it cast specially with QUAD-S. Clearly this was not done in order to pass it off as a genuine Norton engine so it may well prove to have an interesting history. The form of the crankcases is similar to a number of other engines of the period so finding out what it really is could be rewarding."
Newer Post Older Post Home